Everyone’s getting spanked but me

The I in Team (David Fury) 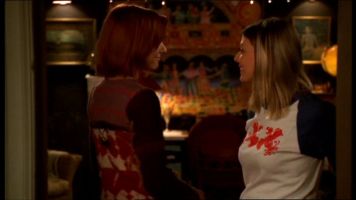 I’m sorry but despite so much happening in this episode, the main thing I wonder about is whether Willow and Tara share their first kiss when irony goes all ironic.

Loads does happen in this episode: Buffy joins the Initiative and the late 20th century (by gaining a pager), she and Riley have sex for the first time (rather unpleasantly intercut with some demon fighting; just how different is Buffy from Faith?), we learn that Prof Walsh is a voyeur and then discover she’s really, really evil, we meet Adam and then we lose Professor Walsh.

Actually, too much happens, it’s all rushed and the episode leaves you feeling rather breathless and it has a terrible last line: “Mommy”.

“And I don't want you crawling back here knocking on my door pleading for help the second Teen Witch's magic goes all wonky or little Xander cuts a new tooth. We're through. You got it?” Spike gets to eat those words.

Buffy is forgetting her friends: while Willow tells lies because what is happening to her isn’t something you tell someone who isn't paying you any attention because of the huge distractions and turmoil in her own life. “I mean, I could have invited somebody else if I knew it was an open free-for-all.” “I'm sorry. I had no idea. My total bad. So, who did you want to invite?” “What?” “You said you wanted to invite someone.” “No. Not-- no one. I meant a hypothetical someone which is to say no one. What are we celebrating?” 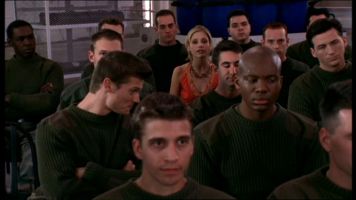 “You mean the camo and stuff? I thought about it but, I mean, it's gonna look all Private Benjamin. Don't worry I've patrolled in this halter many times.”

“Remind me. Why should I help you?” “Because you do that. You're the goody-good guys. You're the bloody freaking cavalry.”

We’ll just say it’s the pain that makes Spike say Rocking the Casbah and not Rock the Casbah. 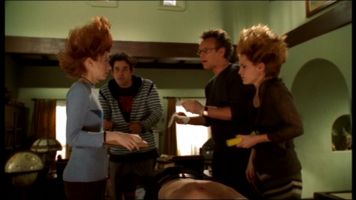 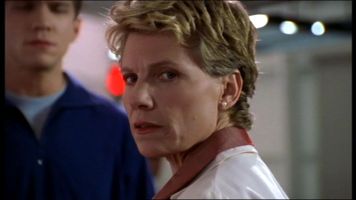 I’m disappointed that we were deprived of a real confrontation between Buffy and Professor Walsh but apparently Lindsay Crouse wanted to leave. I can't say I felt her heart was in it. I first saw her in The Verdict (in the days when I went to the pictures weekly and often went to see films more than once) but I most remember her for House of Games when she is astoundingly wooden. Still, you have to have sympathy for anyone whose parents named her Lindsay Ann Crouse to pay homage to her father's writing partner, Howard Lindsay. Obviously, the ideal way to give a child her own identity.