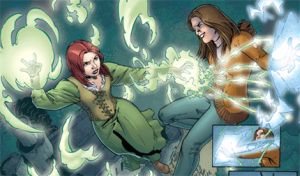 Ethan Rayne looks like Nathan Fillion as Caleb (at least in the first panel).

My eye while looking at the image of Buffy with Angel and Spike is caught not by the nudity but by the fact that Buffy is in a nurse’s uniform and suspenders which doesn't strike me as a woman's fantasy (but what do I know? see later).

Tara is in the cube on the bottom left and that is Joyce atop Faith (this must sound kinky to the uninitiated).

Any panel with Andrew in it is a wasted panel, rather like season seven when any scene with Andrew in it meant less screen time for characters I actually cared about. There is no offence intended to the actor because it's the character that sucks. And the strip poker panel is just lame and offensive.

I do have problems that these not particularly bright men (except Giles) are directing the actions of hundreds of women. I'm not exactly getting a feminism vibe yet.

As for the dead Kennedy misdirect I was genuinely shocked when I read that. Firstly because I was made to feel guiltily happy that Kennedy was out of the picture, and secondly, I was appalled that Willow now had two dead girlfriends. It wasn’t funny, it’s baiting Tara fans and Kennedy detractors (not always one and the same thing) and it’s mean Jossing.

Willow fancied Xander (and Malcolm) and actually had sex with a very stubbly guy called Oz. I’m happy that she’s “gay now” but please stop with the suggestions that Willow was only marginally interested in guys.

Oh blimey, this sounds like I hated it but I didn't, I enjoyed it a lot: it was the best issue so far. However, the dissection that goes on the net makes me rather jealous I couldn't do the same for the TV series.

Which brings me to this criticism of the cover by Jo Chen which reminds me of my first reaction which was "gosh, look at those". I am conflicted because yes, Willow's boobs are bigger than before (maybe she's pregnant?) but at the same time I love it. I'm not a man and if she is drawn for men then it's worked on me too. However, I do agree with a commentator (Ravenwing263) who criticises Chen for her portrayal of Gert as far from dumpy.