I listened to the commentary after watching this and it was great fun so I have made a note not just to listen to the Joss ones. 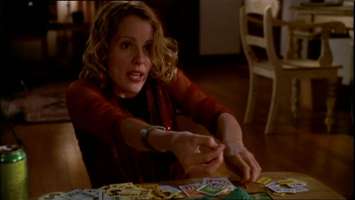 First, I can only totally agree that Emma Caulfield needs to be in a sitcom because she is a marvellous comedienne (and not too shabby an actress either). This is just fab (and it includes a little hand clapping too): "Oh, crap. Look at this! Now I'm burdened with a husband and several tiny pink children, more cash than I can reasonably manage..." "That means you're winning." "Really?" "Yes. Cash equals good." "Ooh! I'm so pleased. Can I trade in the children for more cash?" 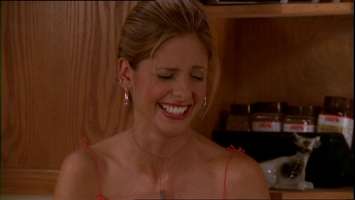 Second, how mean are they making SMG laugh so heartily in this when she just can't do it.

Dawn isn't annoying, it is Buffy whinging about Dawn that is annoying. There is so much Dawn hate out there (truly, look it up, it's scary) which is only matched by the Riley hate. While Riley is no Spike, he is a step up from Angel who I thought was dull. Riley is also dull (though he's better looking and a better actor) but that's no reason to hate him. What the scriptwriters do to him from now is a reason to dislike them not him. Anyway, back to Dawn, she was a teenager and consistently written as younger than the actress (the excellent Michelle Trachtenberg who clearly is no longer little Dawnie) so she was always going to rub people up the wrong way but I liked her and wished they had done more with her in season 7.

This is a strong episode until Buffy's outrageously over the top lambasting of Dawn's behaviour which leads to Dawn's kidnapping (not her last). Mercedes McNab as Harmony is a funny bit player (like Tom Lenk in this episode...) but totally stretched as the inept evilness in this (though I accept "So, slayer, at last we meet" is a great line). Harmony is Glory-lite which considering how lightweight Glory was is quite an insult.

The problem with the opening scene is that it isn't Sarah Michelle Gellar doing all the focussing: it's her stunt double, and it just doesn't work.

The breakfast bar scene which was very nicely choreographed.

Giles and his red car: "Giles, are you breaking up with your car?" "Well, it did seduce me, all red and sporty!" "Little two-door tramp."

Cast your mind back a whole episode ago: Joyce totally oblivious to Willow and Tara's relationship and then this: "Huh. I guess her generation isn't cool with witchcraft."

Giles's delight with the discovery of just how much money a magic shop would make and a new location for the Scooby gang to gather.

A lovely scene (which was an afterthought) with Tara and Willow: "I-I know, you're right. It's just hard. That outsider feeling." "Tara...you're not an outsider." "Well, yeah. I kinda am." "No, you're not." (yes, she is) "You're completely one of the gang now. Everyone accepts that. You're one of the good guys." (everybody has secrets in Sunnydale)

And then Buffy laughs and I don't care about the rest except, please stop hitting Spike; he may be a demon but the continual hitting is unpleasant.