I taught you teeny Tinkerbell light

Out of My Mind (Rebecca Rand Kirshner) 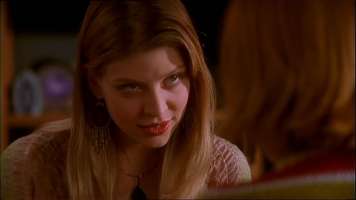 Uh oh, a sign that Tara won’t be one of the dynamic characters in the future: “I just keep thinking how cool it would be, if we got a real psychic to sit up here and read fortunes and stuff.” “You should do it.” “Not me. But, but I'd love to, to watch and learn. From someone who's really good, you know?”

Harmony in small doses is funny: “Taking up smoking, are you?” “I am a villain, Spike, hellooooo.” (she starts coughing) but later in the episode I’m all “please make it stop, now”. The scenes in the college operating theatre (or whatever the hell it is) are just stupid and annoying and let’s face it, totally implausible (Spike even moves his head at one time) and Harmony’s smoking is just not funny: entirely lame scenes.

Joyce faints: “Who are you?”

I’m not happy with the way Buffy and Riley’s relationship is going because I get the vibe (and we get hit over the head with it eventually) that it’s all Buffy’s fault. She’s apparently unreachable, untouchable and doesn’t love him. He can’t deal with that so what is she supposed to do? Run after him? (I do concede that maybe she shouldn’t have left him quite so soon after his life saving operation).

Spike could leave Sunnydale to get the Slayer out of his hair but he can’t do that when he’s in the title credits.

But, despite the general ineptitude of this episode (including the embarrassing conversation that Willow and Buffy have at the beginning) it has a jaw dropping ending: “Oh, god, no. Please, no.” 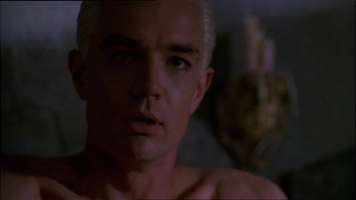