Well, what’s so bad about them coming here? Aren’t they good guys?

Episodes like this leave me a bit stuck for words: the Watchers' Council has that effect. The bizarre "Englishness" of the characters doesn't help (maybe Joss as an Old Wykehamist hasn't actually met any ordinary Brits) and if you are going to hint strongly about a paternalistic organization why not go the whole hog and stop foisting female Watchers on us. And if a Watcher is paid then why isn't the Slayer?

The highlight of the episode is the amusing montage of interviews in which Willow actually manages to be cute. It's a well worn but fun device next seen in Entropy. My favourite bit is when Tara makes an inspired guess at level five. 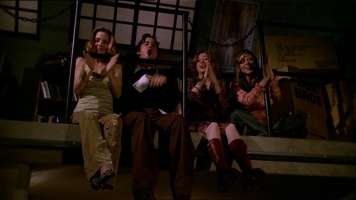 Buffy's speech may be the last of the effective ones. I love the gang watching from the gallery with their legs dangling over the edge (except - oh, go on, have a drink).

Poor Amber getting saddled with lines like this: "Are you sure they're English? I-I thought English people were, um, gentler, then, uh, normal..." 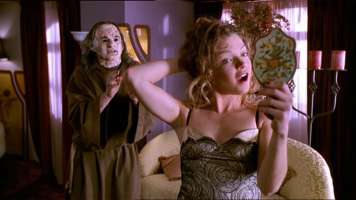 I owe Clare Kramer an apology. She is getting into her stride as Glory and her relationship with her minions is fun.

And a big hello to the Knights of Byzantium.