A visit to the Dome 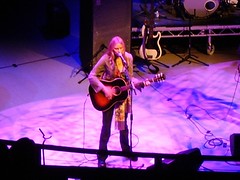 The Dome was a mass of humanity particularly along Entertainment Avenue. It was like Blade Runner but without the rain: thoroughly depressing. The Scissor Sisters were also playing in the Arena and there was a disappointing lack of outrageous clothing and campiness.

Aimee Mann was as accomplished as all the live performances I have downloaded suggested she would be. She was pleasantly rude about Posh and Becks, charmingly forgot her lyrics and concluded with the "I have never played this live before", Superball. The sound was superb and yet the venue was lifeless. It might have been different in the stalls but up in gods it was lacking in any atmosphere. There was no excitement, no anticipation, no squeals of recognition when a song began, just polite applause. There is no way I'd go there again. No amount of being able to see properly makes up for the thrill of feeling the atmosphere of Espers at the Bush Hall even though I couldn't see Meg and Helena at all. 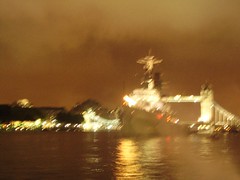 So sadly, the highlight of my evening wasn't Aimee but the journey back to Waterloo on a catamaran. It was drizzling, it was chilly, it was fabulous: racing down the Thames watching commerce and history go by. The boat was full to capacity and buzzing with excitement unlike the O2.