I blogged about the first three issues and then stopped. I'm not clear why. Ahem, several issues later, I'm not actually convinced that I really like them though I wouldn't for a minute consider stopping reading them. Buffy's relationship with Satsu felt off to me. I know I am negatively influenced by the media coverage that Dark Horse encouraged and this definitely makes me sway towards thinking it was a cheap and sleazy gimmick except I love how they broke up which was nicely done.

The Renee thing? I'm bored now of this sort of thing, really bored. And please do something with Dawn, she is not a joke. I have at long last read Joss Whedon's run on Runaways. I say at long last as if it's my fault that it dragged over many months but I suppose it is true that in years to come no one will care what delays there were unless it is poor stuff anyway. Which this isn't. By the end it was pretty darn good.

Xavin's constant appearances as a man really bugged me so I was delighted when JW dealt with the issue across two superb pages. I am pissed off we didn't see them kiss particularly since we saw Victor and Lillie (the one I think of as Caitlin from Heroes) kiss at least twice. I must say that Xavin as a woman drawn by Michael Ryan was gorgeous. 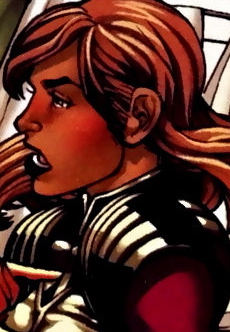 However, the run was messy and abrupt in parts but much better than I ever thought it was going to be when the delays hit.

The least said about Adam Hughes' covers the better though I give you the "Once More, With Feeling" soundtrack cover and rest my case. This was messy (again) and confused and frankly not very good. Shame.