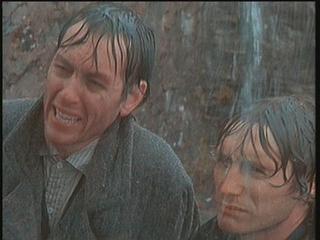 I'm too straight-laced to appreciate this film. Maybe it's because I don't drink more than a glass of beer a month, I have never taken drugs and I'm too right-on to find predatory homosexuals funny (Richard Griffiths seems to have cornered that market).

I just didn't work for me. I know what scenes are supposed to be particularly funny but I didn't funny them so. The teashop scene was an example of oafishly rude behaviour by a couple of self-absorbed arseholes. I couldn't see why Withnail and I were friends because Withnail was a selfish cowardly bastard.

The performances were excellent with Richard E. Grant managing to make me feel a little bit sad for Withnail at the end.

I Was a Male War Bride (aka You Can't Sleep Here)

This was too long and if some of the scenes had been trimmed it could have been perfect.

Like Mr Blandings... I didn't find it hilarious but I did find it consistently amusing. Cary Grant was a wonderful comedian particularly when not saying anything. I loved how much Ann Sheridan appeared to be enjoying herself and her natural laughter made her character appealing despite how much Catherine bossed Henri around at the beginning which was slightly tiresome.

The location shooting added an extra dimension and probably added to the length of the film because I can't imagine a studio-based film being so indulgent. Ironically, my favourite bit was in the studio in a back projection sequence with Henri in a side-car telling the absent Catherine how much he likes her being there.

I prefer this to Bringing Up Baby and it is infinitely better than Monkey Business.