Why, everybody in Mandrake Falls is pixilated - except us.

Frank Capra was a genius. I have no idea how he managed it but every sentimental, corny, mushy, unlikely scene in this film just wasn’t.

The dialogue (by Robert Riskin), acting and casting certainly helped. The film overcomes its abrupt changes in direction with charm and verve. 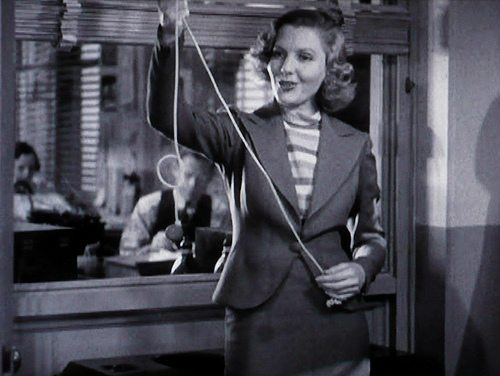 I love Jean Arthur. She makes me laugh (I know she is supposed to but it doesn’t always work out that way) and her cracked voice gives her dramatic scenes extra poignancy. The hard-boiled but actually quite squodgy girl reporter was a thirties standby but she played it so well. The rope and coin tricks were quietly funny.  When she drops the coin and had to get on her knees to search for it, I was reminded of the piggybank scene in Easy Living. This excerpt from Ray Carney's American Vision: The Films of Frank Capra talks about Arthur's performance in the film and has a fascinating take on the dropped coin incident.

I’m not a fan of Gary Cooper. I can’t think of another of his films that I have particularly liked but I do like him in this particularly when he was untidy. I liked the fact that Longfellow rang up Babe to confirm the truth of the story rather than relying on secondhand news: that happens too often in films and on TV.

Lionel Stander was super as the strong-arm who was the first to recognise Longfellow’s merits. The two old ladies (Margaret Seddon and Margaret McWade) were hilarious and I really liked John Wray’s affecting performance as the farmer.

There is a huge problem with this film that stops it from being completely enjoyable. Why is Longfellow so violent? Thumping people was not the answer to any of the problems he faced and his powerful words at the hearing amply demonstrate this.