Oh dear, three duds in a row. I have very little to say about this episode that can be construed as positive. I don’t actively dislike it the way I detest “Dead Man’s Party” and this is mainly because I can’t bring myself to care that much. Willow’s hair was nice (though the cardigan/coat thing wasn’t so much) and the invisible fight and, erm, the revealing of the Trio was fun. The invisible sex scene was shorter than my still curled toes remember but I could have done without the ear nibbling. [Interestingly Marti Noxon wasn't keen on the concept of invisible sex but Joss Whedon and David Fury were which makes me have kinder thoughts towards MN.] Buffy is outrageously disrespectful to Xander when she does that. The social worker’s humiliation was excruciating particularly since she hadn’t behaved at all unreasonably at the Summers’ house. 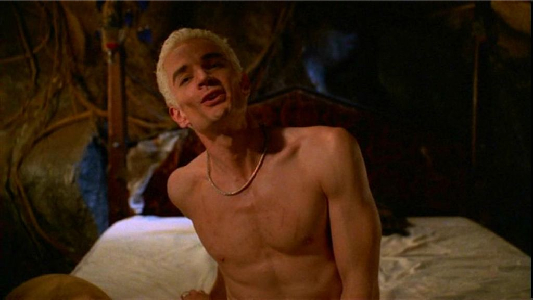 Which brings me to Spike. There is something visceral (thanks Charles) about him that provokes disgust in me. He looks like he stinks of cigarettes and alcohol like a bus station tramp and, as I have mentioned before, his body is too well-defined and just reminds me of a cadaver (which is highly appropriate I suppose). I didn’t realise until these last three episodes that I disliked Spike at all. I certainly liked him a lot in season 4.

Anyway, we learn that an uninhibited Buffy is a selfish Buffy, that Warren is the evil one of the Trio and that you can see the wires operating the social worker’s keyboard when Buffy was being hilarious in her office in the widescreen version.

This season is at its nadir with this episode though it barely picks off the bottom with the forthcoming “Doublemeat Palace” (I actually remember that more fondly than “Beer Bad” so we’ll see how it goes…) and there is still “As You Were” to come.

* Oh dear, I'm quoting Andrew which means the best quote was from the Trio.