And if you try, you're gonna have to go through me first. Understood?

OAFA is way down on most people's lists of favourite Buffy episodes and is often very high on people's worst ever episode lists. However, I have recently realised that if you like Tara and Dawn then it's not so bad.

They didn't think further than the end of season five for what to do with the character of little sister, Dawn. Their first mistake was to make her behave younger than her screen age and Michelle Trachtenberg's rapid maturing didn't help matters. She is just a human now but that still doesn't take away her mystical beginnings and they really should have developed that. Otherwise she's a teenager and sometimes that's not a lot of fun for the audience except when they get to say “shut up, Dawn”. With “get out, get out, get out”, legions of haters were born and this episode lost some potential friends.

Why else might this episode be bad? There is the introduction of a random new friend (never seen before and never seen again); a genuine red shirt in Richard (some people complain about the cheesiness of that which seems weird to me in such a pop culture rich series); Spike and his friend Clem turn up uninvited; and Buffy guesses about the wish extraordinarily quickly. None of those things bother me in the way that inconsistent characterization, poor taste jokes and a bare-chested Spike do.

Anya is mighty fine because she is absolutely right to criticise Willow while Tara is right to intervene. I remember being rather thrilled when I first saw this scene. Two essentially underused characters are now in the process of getting more interesting screen time. 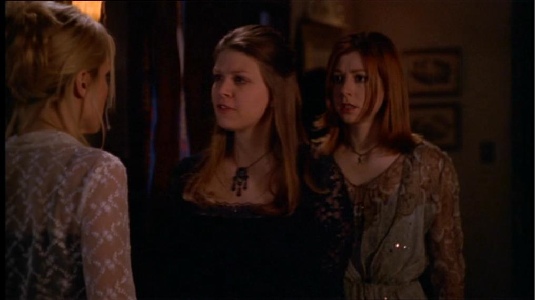 Kali Rocha is a hoot as the vengeance demon Halfrek: "Most of us try to be a little more well-rounded. And actually, we prefer "justice demon". Okay? FYI." I think it's odd that the vengeance served up included Dawn who after all was the wronged party. On the hand, she did get exactly what she wished for.

All in all, I do like this episode except for Tara joking about Spike's pants. The jokes just fall flat for me and I am disturbed by the fact that pants aren't trousers but are underpants.

Andy ruined my viewing of one of my favourite scenes in BtVS because he was complaining about Willow's top which was perfectly fine while he should have concentrating on Buffy's off the shoulder top.

Tara and Willow's awkwardness is so adorable and Tara swigging down Buffy's drink is perfectly timed. And Richard is cute - cuter than Spike.