My hat has a cow

As You Were (Douglas Petrie) 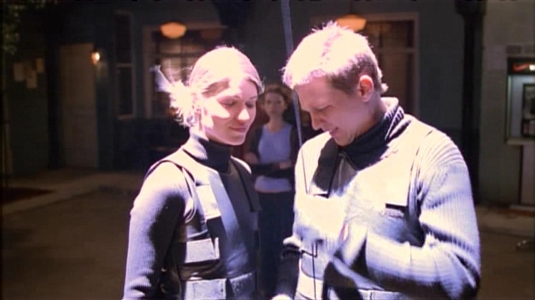 A wise person (somewhere on the Internet) said that there are many ways to watch an episode of BtVS because each person has their own biases towards story elements and characters and different levels of tolerance towards plot deficiencies and contrivances.

Sometimes I care a lot about deficiencies and contrivances and sometimes I don't care at all. I don't mind at all that Spike is the Doctor (although making him sound less like Doc might have been a good idea) because after all he is "Deadly. Amoral. Opportunistic."

And it is cheesy but no more so than a popular (not round this way) episode like "The Zeppo" (ha, my review of that totally demonstrates my lack of tolerance). I like Xander and Willow's over the top admiration for Nick and Nora Fury - it reminded me of "Ted".

Whenever I said the name of this episode I would shudder and mutter "Riley and his wife, yuck" which is no surprise since the time I saw Riley my blood was boiling with Marti Noxon induced indignation. 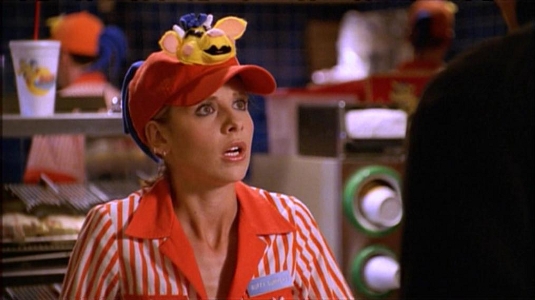 I am happy to announce that upon watching this for only the second time I have to admit to appreciating it a lot more and actually finding it incredibly sad. Riley and Sam separately and together make Buffy hyper aware of how sucky her life is. She makes the welcome and healthy decision to end her relationship with Spike and the rest of her season is set up. In addition, any episode that makes Willow a little more lovable than she has been recently can't be so bad. Her "chipper" moment in the Bronze with Dawn is sweet.

Anya and Xander stuck in the traffic listening to hell radio and stuck in their nice bathroom were funny and sad scenes particularly in light of what is to come.