Nothing is what it appears to be

Joss Whedon completely swiped the idea of a kidnapped and sexually abused child growing up to be an expert in the field from his clearly highly generous pal Tim Minear who dealt with a whole series on the subject called The Inside. I was surprised to see in the first scene how Echo/Caroline became a doll and I think, studio interference or not, that was an error. Too much, too soon.

I think all the characters were interesting and intriguing with the exception of Paul Ballard and Laurence Dominic. I haven’t much to say about Laurence except the role seemed a standard clichéd henchman type. I have reams to say about Paul Ballard. I want to like Tahmoh Penikett because he seems like such a nice bloke but his performance as Helo and now Paul show that he is rather limited as an actor. It doesn’t help that two of the scenes he was in were by far the worst in the episode. They were terrible. Really terrible. The kickboxing intercut with Paul talking to his superiors was as bad as Buffy and Riley having sex intercut with Buffy and Riley fighting the Polgara demon. Oh, the subtlety. Look at Paul! He’s tough, he’s manly, he can even keep those shorts up. Look, he’s down and out! Oh no, look at that comeback! He’s so hard! Apparently a bare-chested Tahmoh is supposed to appeal to the laydees in the same way as a micro-skirted Eliza is supposed to appeal to the chaps but I just think it’s cheesy, tacky and childish.

Paul’s second terrible scene had horrible dialogue and the lamest last line “wash your hands…and your shoes”. Please do better by Tahmoh, Joss, because he may end up like Apollo on BSG in that I glaze over whenever he is on screen.

I am bothered by my own lack of discomfort about the concept of mind-wiping and using these people as objects for other people’s desires and needs. I’m not sure if this episode managed to get across the skeeviness of it all. There is the scene with Sierra being erased for the first time but I was distracted by the ease in which Echo got up the stairs and into that area of the Dollhouse and by Dr Saunders lurking in the shadows (to what end?) so its impact was actually lost on me. However, my reaction to the first job we saw Echo on was to ask but what about venereal disease?

I can think of things that bother me at the moment but may prove to be suppositious. I will say that one thing that saddened me was the dropping of the character of the active called November to be played by Miracle Laurie, in favour of a new character who will be "playing against (and pining for) Tahmoh's character, Paul Ballard". That doesn't sound boring, does it?

My favourite bit was the transition from successful hostage negotiator to brainwashed doll: 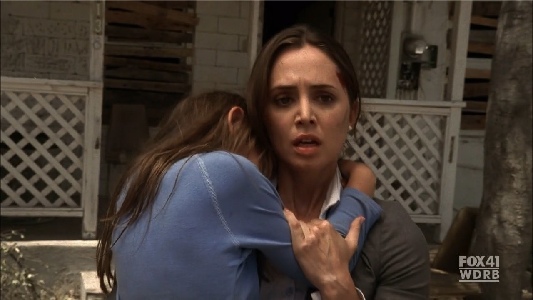 PS: to every person who says that pilots generally suck (and just why would that ever be true? pilots are supposed to hook you in), I say Dead Like Me.