Not anymore, but he was, trust me. Is he still a doctor?

Mad Men - "For Those Who Think Young" 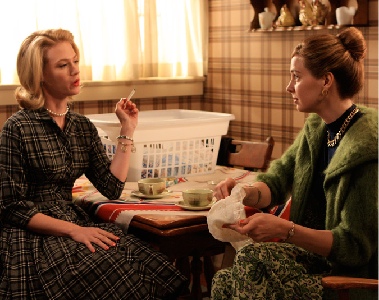 Mad Men is back on British screens but not too explosively or even particularly sparkling. I wonder how such a low-key opener worked on new viewers. There were plenty of good moments but there were too many scenes of Don pontificating obscurely about advertising as if it is important. I’m afraid that Don and his charm will never persuade me that it is.

I’m not sure if I like where Betty might be heading this season. I liked her taking charge while ordering room service but what she did with the mechanic was dangerous. I’m not sure I even believe in the scene, it felt completely off-kilter. I did think she was offering him sex but I now think that isn’t what she was doing which leads me to ask just what she supposed to me playing at?

Most of the time I find myself reluctantly not liking Peggy. She was so nasty to Don’s secretary (Lois) but I did feel for her when Pete asked her if she wanted children. Pete is such an idiot. He has no notion of how unhappy Trudy is because she cannot conceive.

I’m never sure of what to make of Joan. I thought she was mean to Lois too but then she put the photocopier in Peggy’s office so she can’t be that bad.

Sal being married is interesting. I wonder if they will make his wife oblivious or suspicious.

Don is having a midlife crisis and can’t get it up. This is not a particularly thrilling or unusual storyline but maybe we will see Betty benefiting from this or getting into trouble with someone less nice than the mechanic. Who is Don sending poetry to? I have a notion who it isn’t. Rachel

My favourite scene was in the lift (although I do find it hard to believe that even now two men would speak so lewdly and crudely in front of strangers in such a confined space). I did like that instead of Don drawing attention to the woman by directly telling them off, he made a big deal of it the hat pointing out how awful their behaviour was.

Writing about this episode has made me realise how much is packed into each 45 minutes. I’ve just remembered the sequence of different characters as they watched Jacqueline Kennedy in the White House (“where’s her husband?” asks Sal) until it stopped at Pete who was watching something else.