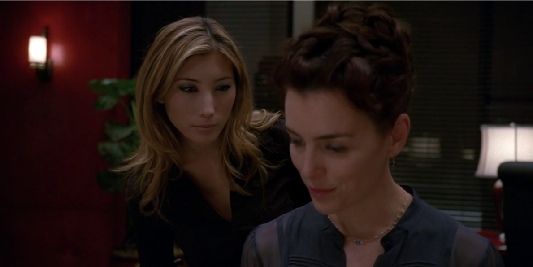 I vowed to myself that if I disliked this episode of Dollhouse as much as “Stage Fright” I wouldn’t blog about it because I really didn’t like writing about it at all.

This started off with heavy breathing which of course made us all roll our eyes only to find ourselves confounded by a woman in labour and Echo as doula. Quite why she was a doula in a remote location can only be explained by the symbolism throughout the rest of the episode. I don’t care anymore if something is implausible; I’m giving up worrying about that.

Eliza Dushku was at her best (so far in the series) as the reset Echo who comes to in a horrible place where men slap her. She made her can I go nows rather affecting. In addition, her awakening after her doula mission seemed more aware and less mechanical then usual.

Some folk complain that they are fed up with comparisons being made between ED and Dichen Lachman. However, when they play the exact same imprint I think a comparison is only fair and DL wins.

I also really like Enver Gjokaj as Victor/Lubov. I hope he keeps up this level of charm.

The scenes before we realised that Echo was Taffytastic were particularly unpleasant: multiple rape and the threat of further rape were just nasty and hard to take. I hope that as the series takes off in episode 6 that this kind of scene is dropped. I would also like the now unquestioningly gratuitous shots of ED in her bra to stop too.

Topher is mostly over the top, but as others have wondered, is he OTT or is Fran Kranz? I’m going for the former for the moment.

I have determined that Olivia Williams has decided that subtle acting has no place in the Dollhouse: