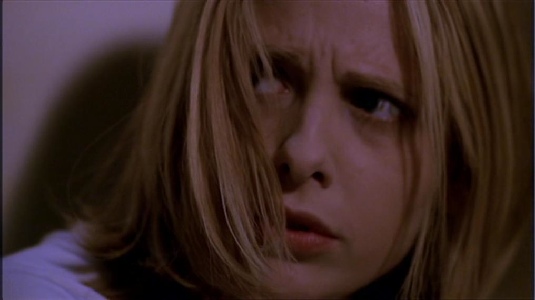 Quote of the season: “You're addicted to the misery.”

I looked back at a review from season 5 and, while the episode wasn’t very good (it was “Spiral”), I wrote about it with affection. I don’t feel affectionate towards the mid to latter half of season 6, a fact which I am inclined to blame on my wavering attachment to Joss Whedon.

Whedon seems to bring out the critic in a lot of us. I think the weight of his self-proclaimed feminism and his desire to explore contentious issues is becoming too much for his work to bear. After all, I can happily watch series like Bionic Woman and Terminator: The Sarah Connor Chronicles and not really care how contrived or inconsistent or stupid they are as long as they reasonably entertain me but I can't do that with Whedon's work because there is supposed to be more to it than mere entertainment.

For me, the problem with season 6 has been its sexual content and unpleasant plotting revolving around Warren. Sexual exploitation and manipulation is part of human life but I don’t want to watch it on TV. Which leads me to Dollhouse – I know the task that Whedon has set himself to do but do I want to watch how he is going about it?

I was initially reluctant to watch Mad Men because I thought that I didn’t want to watch a show about misogyny and racism but the show is of such high quality that although it portrays these things it does so in an interesting, mostly subtle and definitely thought provoking way. It’s not entirely light-handed but it is not ever a gratuitous show. I think my point is that Mad Men is well made but Dollhouse isn’t – yet.

I have now tipped into that camp. Except for “Once More, With Feeling” and “Tabula Rasa”, the episodes have been a mixed bag that were too often unbearable particularly anything involving Spuffy and the Willow’s a junkie storyline and not just because they are difficult topics but also because the writing and the plotting were weak. It has been a struggle to get through this boxed set, and the competition for my time, namely Mad Men and Battlestar Galactica (and that has its weaknesses and inconsistencies but is often exciting and moving), has highlighted the weaknesses of latter day Buffy.

I also blame Anthony Head. Giles’ absence has been keenly felt and not just for the Scooby gang. His mature, adult presence stuck the show together (and ensured less screen time for other characters).

On to a few points about the episode itself:

I think it was brave to suggest that Buffy may still be in a mental institution with the final scene in the hospital. It can and is argued that this doesn’t necessarily mean she has always been there but it is borderline UNambiguous.

A line like “Eventually my parents just forgot” is really not enough to erase Joyce’s reaction to Buffy’s coming out all the way back in season 2. However, if it's all in her head then anything can happen on 7 seasons of Buffy.

Anyway, I don’t really care one way or the other but I hadn’t realised until I read Sam’s comments on Mikejer’s site that there were people who hated season 6 for a third reason. Obviously, I know there are the kittens but there are also the folks who cannot bear the attempted rape in “Seeing Red” and the souled Spike storyline and now I know there are those to hate that Buffy may no longer be a superhero but a young woman making up fantasies in her head – they feel that Whedon let them down.

Tara has a bit of a cheek marching into the Summers’ home but she saves the day: a fact that I love a great deal. She earlier wears a spectacularly horrible top but that isn’t the last bad top she’ll wear.

There is some tremendous acting from Sarah Michelle Gellar and Kristine Sutherland in the scene where the latter tells Buffy that she will always be there for her. It brought tears to my eyes.

I know you're afraid. I know the world feels like a hard place sometimes, but you've got people who love you. Your dad and I, we have all the faith in the world in you. We'll always be with you.

I almost felt sorry for Xander as he explains how pathetic he is (“But then I left and ever since I've had this painful hole inside. And I'm the idiot that dug it out.”) – Nicholas Brendon is great here. I also like the scene when Spike tells Xander all about his relationship with Buffy and in typical Scooby fashion Xander doesn’t pay close enough attention.

Only two epsiodes to go.