This was my favourite episode so far although it was full of flaws. I may have relaxed a bit and accepted it for what it is.

The lack of a sexual element in relation to Echo really improved my reaction to the episode. I was quite nervous at first and I urged them to cut to the chase as Echo was accepted by the cult until I delightfully realised that the cult and its leader were actually okay – apart from the being religious nutters and the hitting women aspect. Echo may get hit in every episode (so it seems) but she always gets her own back (so that’s all right then…).

While I don’t really buy Topher’s pathetic inability to use medical/clinical terms the scenes between him and Dr Saunders were hilarious. Amy Acker’s delivery was perfection. 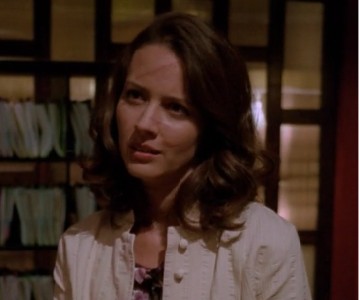 I’ll say again that Enver Gjokaj is really cute and that was before his awakening. Tahmoh Penikett aimed for Nathan Fillion in his first scene with his fellow FBI officer but failed but still managed to be his most endearing so far. The scenes with Mellie were just stupid - a huge dish of something Italian is a daft thing to bring into someone’s workplace, her inability to get that the man in the corridor was a postie was insane and allowing her to hang around in the office was bonkers. As it stands Mellie seems simple rather than sweet and smitten so I just hope it is all going to be switcheroo’d on us very, very soon.

Adelle’s attitude to Echo is suspicious and Lawrence is right that she is a threat. It is a pity he is such a creep. I did enjoy Adelle telling him to take the stairs.

*I wish Eliza had delivered that line better.