Being what? Sarcastic? Unfeeling? British?

Maybe it is too early for an effective “Band Candy” or a “Tabula Rasa” type episode but since the chances of a third or sixth season of Dollhouse are less than zero, I will take one now.

I’ll take anything that makes me adore Olivia Williams who was hilarious. She really made her role in this episode work.

I appreciated that Topher was only marginally different on drugs than his usual annoying, unbearable self. He managed to be unpleasant as he pulled at November’s head and shook it from side to side. He is not a likable young man. 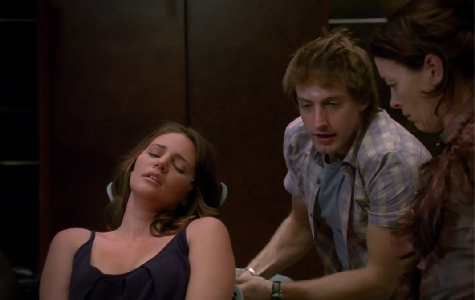 I was initially disappointed that Caroline’s story was that she was an animal rights activist which didn’t strike me as all interesting. However, on reflection I feel that her being set up as a bit of a cliché student activist is going to be developed much further. Adelle does talk of two years playing “this dance” which suggests to me that their conversation isn’t straight after the break in.

Since the reactions to the drugs depended on whether the characters were normal or actives then a few characters have been ruled out as actives. The notable exception is Dr Saunders.

The main storyline put me in mind of superhero cartoon. I fully expected Batman to turn up. It was plainly ridiculous (a drug that acts through touch and wears off before the episode ends!) but I don’t care.

I didn’t even realise that Alice was dressed as a Japanese schoolgirl. The client Matt is a creep and one of the stipulations of hiring a doll should include “no video recording”…

Paul had even less to do than episodes 1-5 except to react to being dumped by his girlfriend. Their relationship has been soured for this viewer so perhaps it’s a good thing. It won’t be a good thing if it’s goodbye to Miracle Laurie which it might be since she isn’t a featured cast member. Boo.

The supporting cast was sterling as usual notably Reed Diamond as an apologetic Lawrence and Enver Gjokaj’s smart NSA agent.

This was by no means as good as last week’s (or least the second half of last week’s) but was better than 1-5. However, losing its must-see momentum was an error. Not surprisingly, I won’t be sad if Dollhouse isn’t renewed because it isn’t very good and I think Joss Whedon should be doing something (anything) else and with a better actress as his lead. Eliza is still okay but that might be okay if the series didn’t need an amazing, fantastic, awesome, convincing, marvellous actress and not an okay one.

After last week’s topless Paul we had topless Sam so it’s a positive relief that there is equal opportunity ogling allowed. Sierra’s white lab coat, short skirt and high heels get up was ridiculous. Who do we criticise? Mutant Enemy costumers or Topher and the unseen back room staff of the Dollhouse?