Although it sounds like you do know your wife. 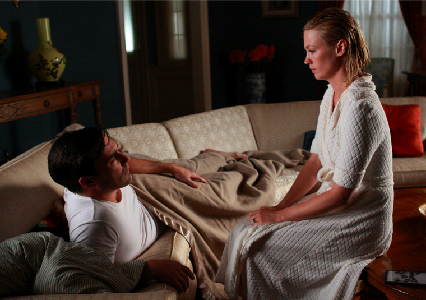 Mad Men is getting better and better. I don't think there is a part of this episode I didn't like even the news that Sally had been cast as Piglet seemed appropriate.

Betty spoke up at last and Don lied to her. Utterly convincingly. It's what he does. For years Dick Whitman has been lying. Don works in advertising where people are sold lies about the products they buy. I was so scared Betty was going to cave because we, the viewers, know that he is a cheat whereas she doesn't and despite her looking and looking for evidence there was none. However, she is finally convinced as she watches a commercial on TV in which the funny comedian (who is horrible in real life) sells crisps. She realises everything is probably a lie and despite her lack of proof (just the word of Jimmy and her suspicions) decides it is definitely true.

January Jones was superb although she has a tendency to look thoroughly modern when her hair isn't curled. Actually, the entire cast is superb.

Talking of Joan, it's about time we had a Joan storyline (and it was as good as last season's lesbian flatmate storyline). I was quite surprised that her fiancé was young and good-looking. For some reason I assumed he'd be a mousy fellow. Joan is unlucky because unlike Peggy she doesn't have a champion and I would be deeply resentful of everything right now.

There was a point when the show reached observational perfection. Joan removes her bra and fingers the deep red marks indented into her skin by the bra and that moment was a "yes! moment". Many women will recognise that imprint on their skin after a long tiring disappointing day and then might wonder when they have ever seen anything like that on TV.

The musical priest is an interesting character and I like all his interactions with Peggy (even if Peggy doesn't so much) and his singing at the end was one of those moments that could go either way but it worked very well indeed. Mad Men certainly knows how to close an episode.