Wait. You should take her fuzzy slippers. Her feet get cold.

I sort of wish that I hadn’t decided to blog about Angel. I dislike myself when I cannot find nice things to say about characters and actors and writers for episode after episode. Suffice to say that Fred, Gunn and Wesley and the actors who played them annoyed me as much as ever. I am also pissed off that the writers had Gunn kill the professor. I am at a loss to understand that. It makes Gunn such an unnecessarily dubious character while whitewashing Fred’s blood lust. She started it so she should have finished it. Though I am aware that the story between these two isn’t over and Gunn’s action will have repercussions, it just seems to me that Gunn has been abruptly pushed in a new direction that I would never had expected. BTW, non-dedicated readers, I am blogging about Angel from a virgin point of view so, in theory, I have no idea what happens next. In theory…but try being unspoiled on the sites I frequent on the Internet. I have inappropriate feelings towards Vincent Kartheiser. He’s so young looking. It initially seemed plain wrong that he fancies Cordy despite the fact that on the show she is supposed to be about 21 or 22. I love how any mention of Cordy’s youth has been dropped from Angel because Charisma always looked way too old to be a high-schooler on Buffy. Anyway, I think Vincent is endearing. And Charisma is looking pregnant and womanly. 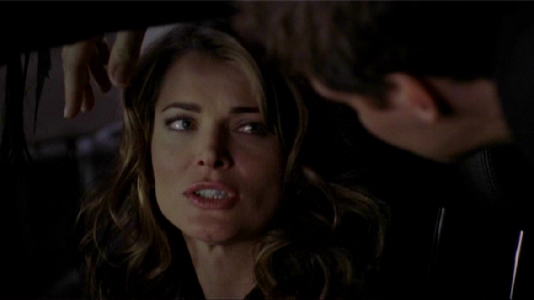 I also think Lilah is endearing though in a completely different way. The writers were really naughty to have Lilah describe Fred as a twig. I was chuckling over that for far too long. I liked her scene with Angel in the car park. "Tragedy struck Gidget? Really? Did she go to that place in the big Texas sky?" "Yeah, yeah, hulk smash..."

I’m no scientist but I’m pretty sure that it would be impossible for Fred to get published and a symposium gig no matter how hidden her work has supposed to have been on the show.

It was a throwaway line but it seemed daft to say that there are forums dedicated to Angel on the Internet. Almost as stupid as the current storyline in Buffy S8.

I quickly sussed out the professor was the bad guy but then I thought that was too obvious. Ah well.

And the least said about "You know what they say about payback? Well, I'm the bitch", the better.