I think we already know what Lady Hacksaway wants

This is another excellent episode. It focused on Anya and I think it must be the first one to do so. She had to wait a long time since her first appearance in “The Wish”.

I was snorting with derision when Buffy announced that she had to kill Anya. “Just like all those times she should have killed Spike,” I sneered. However, by the time she had reminded Xander that she did actually kill Angel, she had convinced me.

While she was reminding Xander of that she also mentioned that he and Willow had been rather unsupportive at the time ("Do you remember cheering me on? Both of you. Do you remember giving me Willow's message: kick his ass.") Not many other shows would reference something that happened four and a half years of broadcast time ago so casually.  The scene wouldn’t really work at all if you didn’t know anything of Buffy’s relationship with Angel. I felt a bit sorry for Willow. She barely got to defend herself and Buffy had bottled it up for years.

There was a lot of Willow to like, except for grimly angry Willow (Alyson Hannigan just cannot sell that to me), particularly chilling was the way she turned on the terrified woman as she used magic to prevent a spider attack.

I am very sad to see Hallie go although a consequence of that is getting fannish about D’Hoffyn’s remark to Anya and from beneath her, it devours.

Even Spike’s scene didn’t bother me. It was alleviating to see an actual manifestation of his visions (that we think are his visions anyway) in the form of soft-spoken, white-wearing Buffy. [Who, by the way, has been wearing some horrible trousers this season. Were they the fashion back in the day? All the way to 2002!]

“I am Aud.” Best line of the show, perfectly delivered. Best visual of the eppy was the sight of Buffy balancing a pot of pencils on her head. 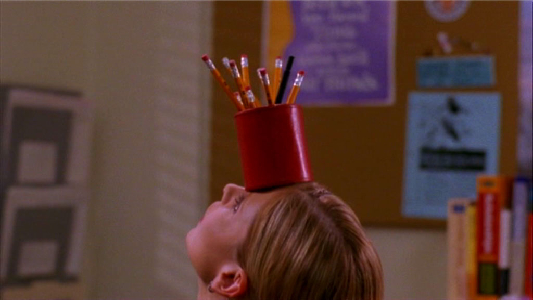 The fight between Buffy and Anya was pretty good but, I’ll say it again, nothing matches a Buffy/Faith dust-up.

Bold statement: all in all, this was an episode up there with the best. Actually, not that bold, after all.