Anchovies, anchovies, you're so delicious. I love you more than all the other fishes. One of the signs of great writing is to introduce a stranger into a cast of familiar characters and have the audience care about the interactions between the stranger and the well-known. This failed miserably in “The Message” (written by Joss Whedon and Tim Minear) where Jonathan M. Woodward played Tracey so it isn’t Woodward that made the trick work. Joss wrote the scenes between Buffy and Holden so it’s obviously something he can’t pull off every time. Andy made the point that Buffy clearly doesn’t remember Holden at all so she has no advantage over us (via in-jokes and shared memories, for example). This suggests to me that “The Message” didn’t work because the Browncoats remembered Tracey while we didn’t. Plus the story was execrable.

Although Jane Espenson and Drew Goddard are credited with writing the episode it was actually broken down like this: JE wrote Dawn’s story, DG wrote the Trio’s, Marti Noxon wrote Willow’s and Joss Whedon wrote Buffy’s. I wonder what happened to the person who wrote Xander’s… It is rather a kick in the chops that after six seasons the writers thought that Xander didn’t have a role to play in this important episode.

Spike has no dialogue and yet his story is told effectively and ends horrifically when he is revealed as a killer again.

Horror is the name of the game as Dawn’s story unfolds. It may be classic horror but it was also genuinely scary and revealed how resourceful and brave she can be. Such wasted potential. 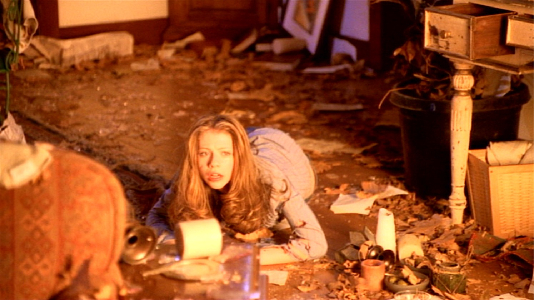 I loved the character interaction between Buffy and Holden. The actors played off each other well. It is sometimes easy to open up to strangers. The look of sadness, dismay and thoughtfulness on Buffy’s face after she dusts Holden is nicely played by SMG who is, shall I say it again?, absolutely fabulous as Buffy. 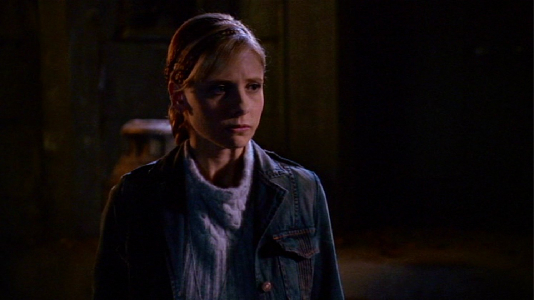 “She's sorry she couldn't come herself.” says Cassie, “She’s in dispute.” said Andy. Only a handful know the whole truth about Amber Benson’s absence but it is a great loss to BtVS that she wasn’t in this. There is no doubt in my mind that if Amber had been in this then it would have been awesome and the episode would probably be in my top ten. Tara egging on Willow to commit suicide, Willow’s dawning comprehension, Tara’s mocking “Oh, baby, you left such a big hole. It hurt so bad.” – all of that would have been amazing. The great “what if?” of BtVS. However, despite the oddity of Cassie (a character who Willow had never even met) being used to get at Willow, this still packs a punch. Alyson Hannigan is particularly good as she realises she has been had.

When Jonathan and Andrew appeared on my screen I gave a Pavlovian groan but their story was compelling and Andrew’s murder of Jonathan after being easily tricked by “Warren” was excellent drama. Unfortunately, the arrival of Andrew leads to the marginalization of other characters in his favour. 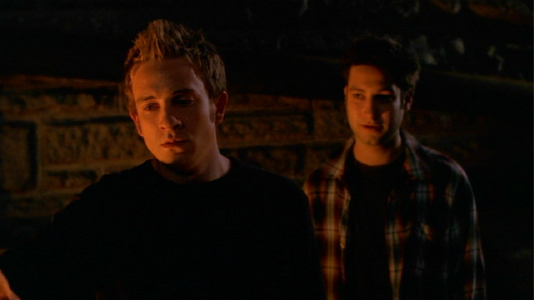 This was a fantastic episode and S7 continues to confound my memory of it. However, there is more Andrew to come and a bunch of Potentials and maybe my memory of them is not wrong. On the other hand, Faith!