I have been struggling to find a reason just why Angel just doesn’t engage me in the way that Buffy does. I have some idea: in "Apocalypse, Nowish",  Angel, Gunn, Wesley and Lorne are trying to decipher the papers from Wolfram & Hart in order to prevent the Apocalypse meanwhile Cordelia and Fred are absent; they are not there as part of the team. OK, Cordelia has a good reason to be missing but Fred is in a café moping about the men in her life and what they did for her. 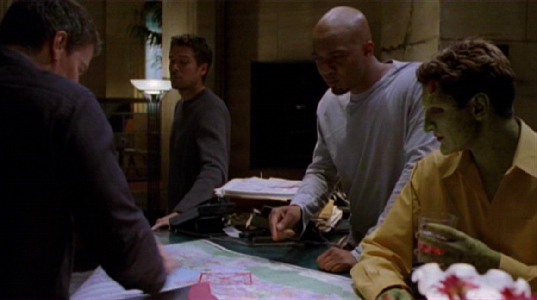 However, I don't really mind that Cordelia and Fred aren’t there; it’s more that there aren't any other women on the show who could be there. The men are in the majority. Of the seven main characters in S4, five are men and two are women.

The question that then popped into my head was, does everything I watch have to be about women? Erm, let’s examine the evidence by considering my favourite recent shows, Mad Men, Terminator: The Sarah Connor Chronicles and Battlestar Galactica.

Mad Men and BSG have more male cast members than female but women are central to how much I enjoy the series. Without Betty and Peggy and Joan and Starbuck and Six and D’Anna, I really wouldn’t be interested.

[I wonder how often I use the word “really”.]

I am bored by John and Derek in T:TSCC while I love Sarah and Cameron. I also liked Riley and Jesse (but only after I got used to Stephanie Jacobsen’s nasal voice and after they were linked together.

Okay, I definitely prefer to watch things with women in prominent and active roles and, if you are like me, I heartily recommend Torchwood: Children of Earth and, no, you don’t need to have seen the previous series (it didn't stop Andy and I liking it).

Do you think that any men ever wonder at any point why the majority of things they watch are about men? "Oh, my favourite films are Apocalypse Now, The Shawshank Redemption and 12 Angry Men, just why do I like watching films about men all the time?" These two IMDb lists are interesting. No room on the male list for Amelie and To Kill a Mockingbird and no room on the female list for The Good, the Bad and the Ugly and Goodfellas. I feel a post coming on.

So I do know why I like Angel less than Buffy but it most certainly isn’t the only reason. Angel has clunky dialogue, poor line readings, and character dynamics that I don’t care about because I don’t believe in them due to their contrivance. This list makes me cringe:

while I only care about Angel/Connor and Cordelia/Connor (spot the connection).

On to the episode: Lilah as Fred was disturbing particularly since at first I thought she was supposed to be a schoolgirl. And having her hair done up in plaits caused Lilah’s hair to be tremendously bouffant later on.

Chocodiles are a real thing!

Satan was rather immobile except when he Springheel Jacked over the rooftops. I don’t dislike slow motion except when it is used in a hackneyed way or to serve no purpose except to prolong a scene and that’s exactly how it was used here.

A bright spot was Lilah (despite her relationship with Wesley) because she gets to call Fred a “Texas twig” (although part of me thinks that is mean to Amy Acker) and summarizes this audience member’s feelings when she says “so let's say we skip the usual two-step, you threaten me, I threaten you, yadda, yadda, yawn”.

I’m not sure what to think of Cordelia and Connor having sex but I do know that in the Buffyverse sex can only lead to bad things happening. And, by bad, I mean worse than the Apocalypse.

Sigh. Why do I continue to watch it? The obvious reason is that I have watched Angel and Cordelia over seven seasons of Buffy and Angel and I do want to see the end of their journey. And the DVDs are cheap. And there are occasional crossovers with Buffy. And I like Cordelia Chase/Charisma Carpenter. And I like Lorne. And I like Vincent Kartheiser (even if I do have to check how to spell his surname every single time I type it). It isn’t hard or difficult to watch. Finally, I want to work out why Amy Acker can’t sell Fred to me but can do so with her portrayal of Dr Saunders in Dollhouse.