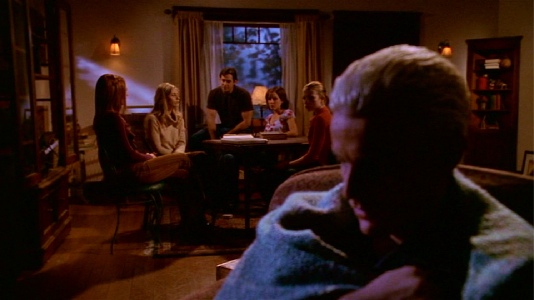 I don't want to think too hard about this (I'll leave that to others) but isn't Buffy's attitude to Spike in "Sleeper" rather different from her attitude to Anya in "Selfless"?

The moment when Buffy/the First encourages Spike to kill is shocking.

I didn't like the way that Anya came onto Spike after he catches her snooping in his room. I realise that it is supposed to be funny and it is because Emma and James are good at being funny but it is tacky. And this: "I got it. No problem, I understand. You think I'm fat." is just idiotic and not funny at all (because I guess it was supposed to be ironic [insert twisted face smiley]).

Aimee Mann! Two songs and a line! OK, the line is annoying because she knows Sunnydale has vampires and it's not supposed to be common knowledge. But, Aimee Mann!

And it was nice to see Giles again albeit briefly.