I left my lunch pail on the bus and I’m having a baby. 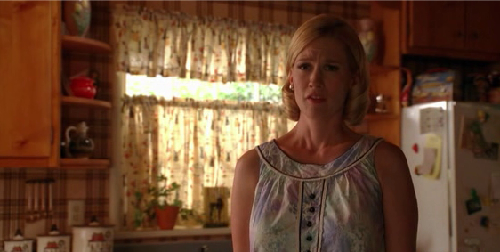 *the first episode this season not co-written by Matthew Weiner

This was an excellent episode chock full of great moments and scenes.

I’m already bored with Don’s relationship with the teacher, Suzanne. The worst thing about “The Fog” was her unlikeliness, her modernity, her empathy, her touching (oi, get your mitts off), and her razzled phonecall. The only bright spot involving Suzanne is when she asked why the Drapers didn’t call the school or send a note about Sally’s grandfather’s death which allowed me to cry in reaffirmation that “they are terrible parents”.

I also felt the conversation between Don and the prison guard (with a suspiciously modern looking number one haircut) was heavy-handed. Yes, we get it, Don is a poor father and a poor husband.

Betty’s fog was nasty stuff and the birthing scenes emphasised her childishness because she was treated like someone who can’t be trusted to make informed decisions. It all seemed pretty believable to me though I don’t get why fathers stayed at the hospital at all when they weren’t expected to partake in the joy of bringing a new life into the world. The average labour for a second/third pregnancy is 6-8 hours so most daddies to be were in for a long, long wait.

Aran, a commentator at Basket of Kisses noted that Don is not seen at any time to touch or hold his new son which is a point worth reiterating.

Betty’s reluctant getting up in the middle of the night for her new child was only the beginning of it. I remember the first few weeks being absolute hell. Perhaps, after the initial euphoria they were actually the worst few weeks of my life and I had the absolute support of my husband. Of course, nobody expected men to help back then. A point made strongly in this episode when Don is reprimanded for taking half a day off work.

Peggy and Pete are such interesting characters and are, by a long distance, my current favourites.

Pete brings out Peggy’s funny side though I suspect he wouldn’t agree. I love her brittleness when they are together.

I was distinctly underwhelmed when I realised that Duck was to make an appearance in this but his dealings with Peggy and Pete made for a couple of great scenes.

Note Pete’s concern when he thought it was his Uncle Herman on the phone. I loved Pete’s indignation when he saw Peggy at Duck’s table and whether he only stormed off because Duck wasn’t courting him alone, he was right to storm off. Pete’s conversation with Hollis was cringeworthy and hilarious. And Pete’s natural charm (well, I see it) came through in the end when they both smiled at the baseball mention. I think I would appreciate Pete’s idea of integrated ads if I knew exactly what they were.

In reality, I think Peggy would take the first opportunity to leave Sterling Cooper but, since I guess it is unlikely that we will be spending screen time in another ad agency, she isn’t going anywhere. Her scene with Don was marvellous though I do think she could made more of the paperclips remark to protest that she brought more to the firm than wee bits of metal. I don’t think she was deliberately manipulative when she stared at and touched the bootees but it certainly got Don’s attention though maybe Peggy telling him he had everything might have made wish he had stopped listening. Don asked his favourite question “what do you want me to say?” and Peggy’s reply “I don’t think I could have been any clearer” followed by “what if this is my time?” was tense stuff. 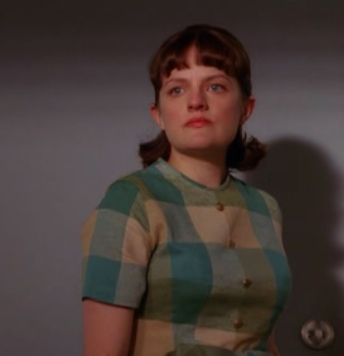 There was a technical goof in the scene in Paul’s office when the bright light behind Pete’s head kept disappearing. This is the first time I have noticed a goof like that.