...of the republic of dresses 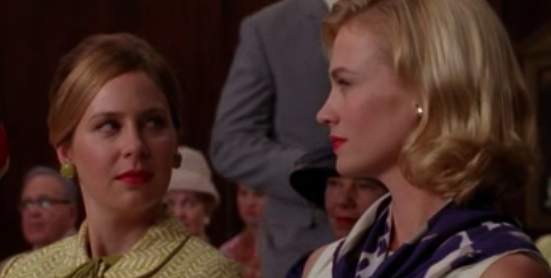 It vaguely amuses me that some people call Mad Men misogynistic when it is probably misandrist, if it is anything. Imagine if this series was written by a woman. Yikes!

Better to think of it as a study of power, privilege and entitlement, which, in this case, is exclusively wielded by men.

The men (in general) are inwardly unpleasant: if they are married, they are, to a man, cheats and liars. The women are not perfect but they are definitely more sympathetic (in general). Betty is the most problematic. For a lot of people, she is not sympathetic because they don’t understand what her beef is. This is a reason why I appreciate this show because the obvious way would have been to portray Betty’s unhappiness in simpler ways: the usual shorthand would be abuse of some nature and Don is not like that to Betty.

I am finding it exhausting reading people’s responses to anything that Betty does (that is one advantage of waiting months to watch it on British TV). There are people who take anything she does as ill intentioned. I am still waiting for the howls of outrage at Don’s scarpering at the first mention of Sally’s misbehaviour. Betty is literally met at the door by real-life and she can’t escape the way that he can and does.

Betty in Rome starkly emphasised that she is an adroit, amusing and intelligent person. I’m not sure about that hair though. She had a whale of time and Francine brought her right down to earth. Her outburst in the bedroom seemed childish to me at first but she knows her life is dull and restricted. She went to Rome after Henry kissed her and although I thought at first she had dismissed an affair with him, the ending of the episode makes that a little more likely.

Betty’s words to Sally that "You don't kiss boys, boys kiss you." is tragic advice. Girls are probably still taught that now that boys are active and girls are passive. And certainly it was what Pete thinks. He has no idea that he raped Gudrun. No idea at all - because he’s a boy and boys kiss girls. It doesn’t actually matter if the girls don’t want to be kissed.

Remember Pete’s outburst from “Out of Town”? “Why does it have to be like this? Why can't I get anything good all at once?” His actions in this are a natural progression from that entitled egoistical attitude.

What bugs me most about Pete’s behaviour is how it negated the amusing scenes of him shrugging his way out of his shirt and of him watching children’s tv and laughing. Actually, what really bugs me is that I had a brief fantasy that Pete was actually just going to be nice. I suppose that is probably how he thought about it at first. He is pathetic and childish and can’t be trusted. If Trudy hadn’t been away he would never have strayed (I can’t remember if Trudy was away when he slept with the model in “Maidenform” but I bet she was).

I was as surprised as Pete to see Joan in the department store. I assume it is a drop in status from her reaction after he left. It was a well-written scene with Pete asking her twice how she was doing.