I had a great idea and I lost it 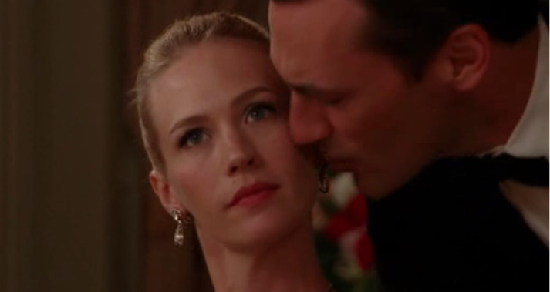 I was surprised with all the love that this episode got online. It was good but it felt very much part of the build up to the conclusion of S3. Only Mad Men could have someone make a huge discovery and then make us and them wait to do something about it.

Many people find the domestic scenes dull and want more Sterling Cooper machinations. Since Betty is the most intriguing character for me then I am happy for the show to spend time with her. I am less happy to spend time with Don and Suzanne. I think her brother is more important. Don saw Adam in that boy and tried to help him which he failed to do for Adam. I think the money and card are going to prove important but I don't know how. Many people think Suzanne is nuts which I find eye-rollingly irritating (just as people were so utterly determined that Don was Jewish in S1). I thought her following Don onto the train was unbelievable (she should be doing her job, for heaven's sake) rather than sinister. Her morals are lacking, that's true. And she make that phone call.

I liked the short scenes leading up to Betty's finding of the keys but I do wish they had shown Betty going through the box more thoroughly. I think the focus on the divorce papers was distracting but I do wonder if she is going to California soon. My favourite moment in the show was when Betty sat down in the chair and her face was caught by a patch of sunlight: she was illuminated. The gut wrenching moment in the show was Don telling Betty that he wanted to show her off at the dinner: ouch, that sums up what he thinks of you, Betty.

Peggy was awesome throughout. She was funny, kind, thoughtful and brilliant. Paul's face was full of astonished admiration rather than anything sinister when she pulled that idea out of the bag.

It is a bit of a cheek to want a writer to tell a different story from the one that he or she is determined to tell. However, I can't disagree with the point of view of Donny Brook over at Basket of Kisses:

There are so many intriguing ideas and characters they’ve just left lying around while we obsess on Don’s same old boring behavior. I mean what was the point of PPL – how can the Brits just leave before the Beatles arrive in the states? How can MW have wasted such a delicious character as Moneypenny? How come Ken still doesn’t have a backstory? Was Peggy’s dalliance with Duck just a one night stand? Is the Ken/Pete war just a red herring? Are they ever going to flesh out Carla and Hollis, or at least introduce one AA character that is like a real human being? I know, let’s make Pete rape someone and then don’t have him on for 3 episodes! Let’s write out Sal and push Joan out to the side, nobody cares about them!

*now off the show: I thought this and "The Fog" were fine work