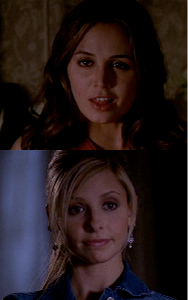 The writers do a terrible job regarding the Scythe because it is the most awful plot contrivance. Why does Caleb tell Buffy (via Shannon in “Dirty Girls”) that he has something of hers. Her interest wasn’t even interest until this lumpen villain was shoehorned into the show. Hey! can you tell I’m not a fan? The Scythe really should have introduced a long time ago along with the Guardians.

Now there may be tons of things unresolved in Buffy notably the fiasco of “Empty Places” but at least we know what happened to Miss Kitty Fantastico. I find it hard to get over the fact that the Scoobies behave as if nothing happened between them. I can understand that the writers are running out of time (series wise) but that makes the decision to do something awful like chuck Buffy out of her home even less wise: they really didn’t need to do that traitorous thing.

If “End of Days” has a place in my heart, it is because it has one of my favourite moments of Buffy:

I’m not sure what to make of Angel’s appearance except to say that if I had to choose a Buffy boyfriend, I’d go for him. But what was the point of Spike also being there except to annoy everybody; people who ship and people who don’t.

This episode is incredibly dull in parts which is a real shame - Buffy limped to a conclusion. 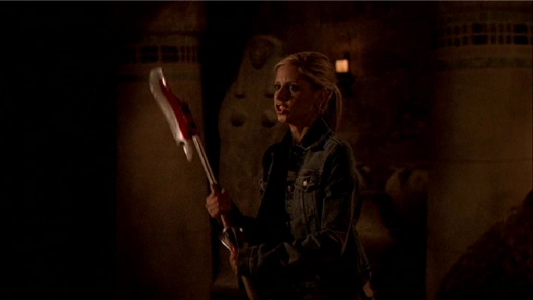