Never Kill a Boy on a First Date

I think this is a strong episode but something isn't quite clicking yet for the creative team. There are good ideas and some very funny moments but it's all failing to come together because the execution is poor e.g. where do the two vampires guarding the outside of the funeral parlour go? Giles hides in a body fridge and the vampires are too stupid to look there?

The relationship between Giles and Buffy is coming along nicely. The actors and the characters have a wonderful chemistry.

I'm afraid to say that David Boreanaz has been terrible so far: I really don't recall him being this bad but he really is awful and he needs to stand up straight!

I love the scene when Xander compares his literally childish watch with Owen's more mature one. Nicholas Brendon is so funny in that scene. Almost as funny is the scene when Giles turns up at Buffy's house to Owen's bemusement. Willow and Xander are then left behind either to wait for Joyce or to lock up on Buffy's behalf. Yet another funny moment is when Xander, Willow and Owen have to remove the pile of furniture which was supposed to be for their protection as a vampire goes for them.

"I have volumes of lore, of prophecies, of predictions. But I don't have an instruction manual." Why doesn't he? Did he lose it?

She wore that outfit to school?! No wonder Giles isn't wearing his glasses. 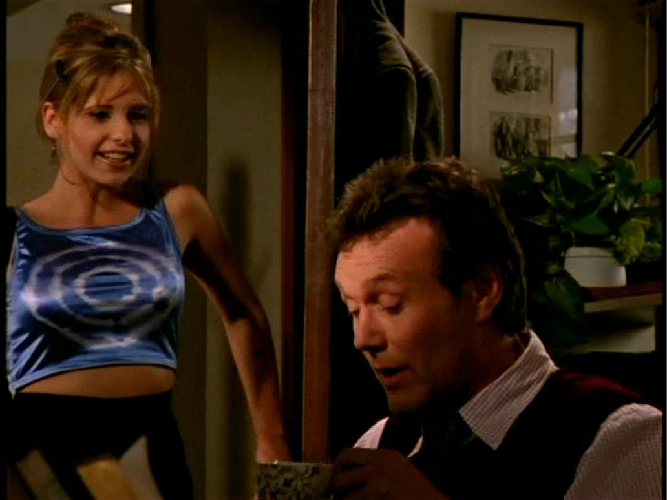