...it will probably be next to an ad for an exploding cigar 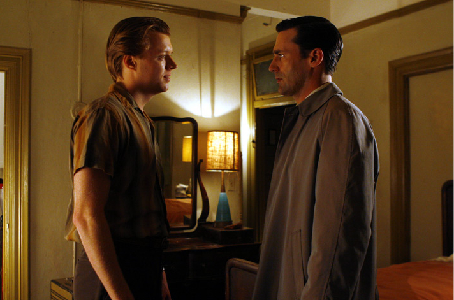 I was worried that Mad Men had descended into melodrama when, and I am sure it was deliberate, Don was rummaging in his briefcase in Adam’s apartment and I thought he might produce a gun.

The man who played Adam was fantastic. I can’t look his name up without finding out if he is in more than one episode of Mad Men. He was the perfect mixture of emotions: sad and vulnerable and happy and scared and anxious and desperate.

Peggy did tell Joan too much and she seemed to panic too much over Don's absence: it is entirely his job to explain himself. Joan was great in this episode with her twinkling eyes when talking to Peggy and leading the meeting.

I'm afraid that I don't much care about Don's relationship with Midge and I hope she's not too important in the future.

I did love the hilarious cut from sophisticated Don and Midge in her bohemian apartment to Pete in bed with Trudy with him wearing pajamas and a vest and eating biscuits and drinking milk. However, Pete is completely slimy and while I'm not sure if I like Trudy she certainly seems at this moment to be too good for him.

Paul is also horrible and to think he was almost nice.