You want to bounce me off the walls? Will that make you feel better? 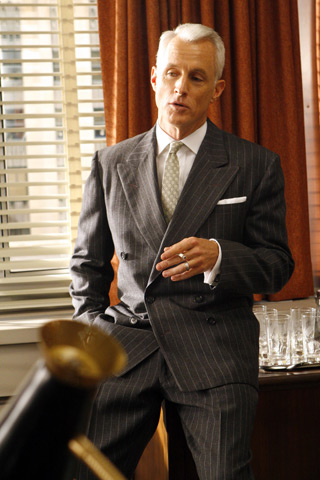 Don's revenge on Roger wasn't particularly plausible because there is always more than than one lift available in skyscrapers (plus service lifts) and on any floor Roger could have tried the lift again (despite Don's unlikely advice that they would hear them) and stupidly didn't.

Peggy's freaked out reaction to Pete's hunting, killing and eating story was very played by Elizabeth Moss. I personally don't think she was turned on but in a sea of TWoP posters who don't agree then maybe I just saw what I wanted to see.

There was some ridiculously unsubtle vodka advertising in the milk and vodka scene with Roger.

Clearly there was no patient-doctor confidentiality in 1960.

I hope the Betty storyline plays out in Betty's favour despite her frustrating behaviour. Don's attitude to her makes me despair. He was willing to humiliate Roger but wasn't prepared to understand Betty's position on the evening it happened when he blamed her instead and continued to be awful to her the next day. The show seems to be supporting the notion that Betty is childish (for a variety of reasons), after all, giving a nine year old a lock of hair because he asked is childlike.

There are six episodes to go and I'm thoroughly enjoying this series. The accusations of misogyny thrown at it were out of order. Depicting misogyny is not the same as being misogynistic. Generally it has walked on the right side of not revelling in sexism with the exception of the ad men's reaction to the focus group in the previous episode. The women in this show from Pete's secretary to Betty's friend, Francine, are all fascinating with depth and variation in character.

I don't want to see "strong" women all the time, I want to see believable women in all our variety. This review by Purtek of the Hathor Legacy of I'm Not There (which I haven't seen) makes the excellent point about how women in films and television don't have to be perfect (or strong) they just need to be recognisable "as though they’re human beings with complete lives, even though we may not see the whole thing".