You think you'd be the man you are today if your father didn't hit you? 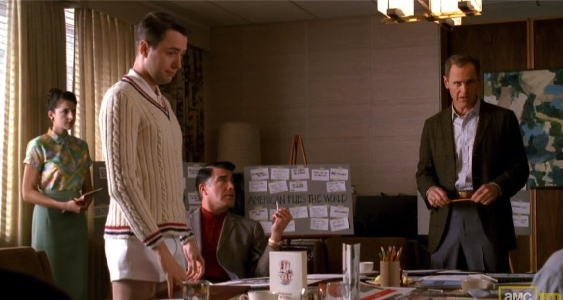 I think it would be awesome if the twist in Mad Men is that by the end of S2 Don and Betty are a proper couple who talk to each other about things that bother them and consequently come to an understanding of themselves and how their relationship could work successfully and happily. Or else she’ll have an affair and leave him.

This is one of the few times I haven’t been sympathetic to Betty’s attitudes and I was quite cross with her. A simple “Bobby, would you put that robot in the other room and come back and eat your dinner.” would have saved a lot of shoving but then we wouldn’t have had the great ending.

I was fed up with Don asking Betty what she wants him to tell her but that little opening up of his self to her and her quiet snuggling up to him was tremendous.

It took a great effort to remind myself that Betty’s passing of the disciplining buck to Don was totally of the time of “just wait until your father gets home”. It’s no surprise that the mother should demand the father punish the children because she is supposed to defer to him too. That’s patriarchy.

Although Don isn’t immune from resorting to violence, I am so pleased that he is refusing to continue the cycle of abuse with his son. Great stuff.

I could have done without revolting Bobbi turning up again and I’ll be pleased if I never see her and her sleazy ways again. Which brings me to Roger who I detest and whom I don’t care about at all.

Father Gill resembled Pete and I liked his relationship with Peggy. I liked that he was a true Christian and didn’t judge her harshly. Her sister’s actions make sense since she’s an unhappy housewife and it doesn’t look like Peggy is remorseful. It was extremely mean of her, mind you.

The American Airlines story was dull except, and this is a major except, we got to see Pete in his tennis shorts. I really do love Pete and Vincent Kartheiser is wonderful. I even said to Andy that I wanted to watch Angel again. We left Angel at the bottom of the ocean.

Christina Hendricks really does have huge boobs. I have no idea how Sally could possibly compare Betty’s to Joan’s.