I'm not your friend in here, Echo

This failed to engage me; it felt flat and unconvincing.

Echo’s closure was the only one that worked for me except I now can’t see that my theory that there is more to her than a freer of lab rats can have any weight any more.

I have gigantic reservations about Sierra’s storyline (let’s face it – who can’t not have reservations?) and I can’t see what closure she got. She meets the man who put her in the Dollhouse (and he’s even worse than you can imagine (I’d rather have the billionaire from “Man on the Street” with his shades of grey than this character’s (Billy from Romy and Michelle's High School Reunion) utter blackness)) and she stands there letting Victor do the work (not that I’m suggesting hitting him is adequate) and it's only after she has shared a kiss with Victor that she falls asleep. So, what does that mean for her? The only thing I can thing of is that she has now stopped linking her rape by Hearn to Victor. Shit, Joss, what are you doing to Sierra?

If anyone in the Dollhouse knows how Sierra got into the Dollhouse then the moral ambiguity in the show now equals zero. Actually, Boyd’s words seem to indicate that he does know and he can still work there? I’m not happy.

Enver Gjokaj and Dichen Lachman continue to impress me with the strength of their performances and they have chemistry.

Miracle Laurie was asked to be even drippier than Mellie Mk I, and ye gods, what did they put her in? She looked like a Dust Bowl Okie. What would have been wrong with jeans and a t-shirt like the others? She is also very tall although I should have realised that knowing that she wasn’t dwarfed by Tahmoh.

November’s closure was a mystery to me. Presumably, before the Dollhouse she knew her daughter was dead so how does visiting her grave help at all? Yep, she’s still dead. Funny gravestone too with no surname and no dates.

Erm, Victor’s closure was sweet, he gets a kiss and can now relax.

Paul was once again practically redundant. It looks like this white knight might save the day by being passive: people keep sending messages to him after all. I called the dream sequence as soon as he opened the door to Echo. This is a Joss Whedon show after all. It was a bit tacky and shows that Paul is definitely a screw up. We need some background motivation for him real soon.

I hope that female handler got a bonus for being beaten up by Echo because somebody forgot to tell her it was an exercise.

Dollhouse makes no sense in many ways. It’s frustrating and the goodwill it regained after “True Believer” and “Man on the Street” is being eroded. The dolls have been reset so unless there is a twist involving Dr Saunders’ actions then episode 9 starts it all over again. Great. 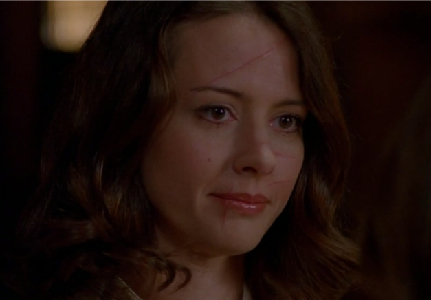 I read yesterday via Whedonesque that Dollhouse may actually be renewed. The last five episodes have to trend towards fabulous or, I’m afraid, I will stop watching. Gulp. 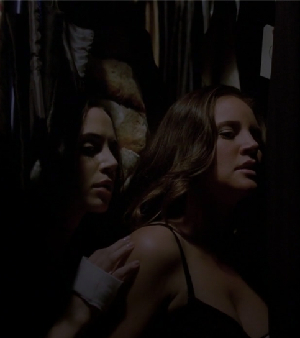