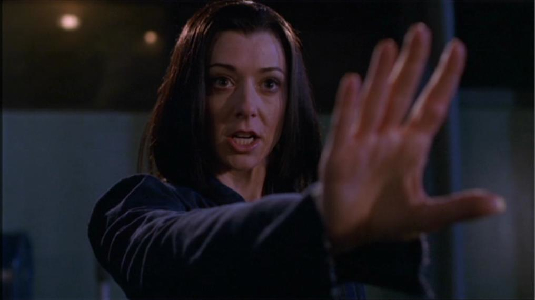 I’m about to commit heresy. Alyson Hannigan isn’t very good as Dark Willow. The terrible dialogue that she was saddled with didn’t help her. “Get off, superbitch” (a throwback to “This Year’s Girl”) and “Cause I’ve turned pro” are just two of the clunkers littering the script. 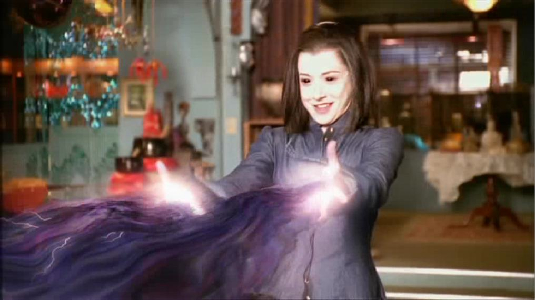 I have no idea whether it was AH’s choice or the directors’ or the showrunners’ to have her so one-note as if she is controlling a great rage but unfortunately she appears as if she is suppressing nothing. It’s as if there is zilch going on under the surface: it’s all shallow water (a puddle even) and highly disappointing. We get a glimpse of the Hannigan magic, and what she can do, when she collapses into tears and into Xander’s arms. 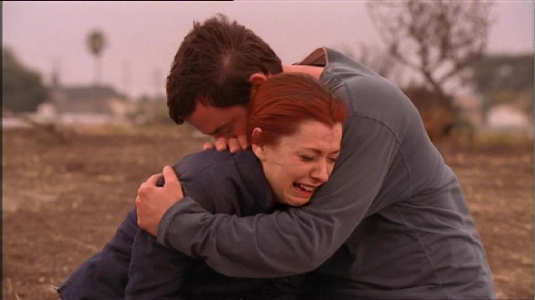 “Villains” now seems a fantastic episode compared with these two. The opportunity for an exploration of Willow’s character was generally passed up for laughable sequences such as Willow tearing down the police station (and screaming) and riding on top of the cab of a truck. The scene between Buffy and Willow at Rack’s is the notable exception except that Willow is more perceptive about Buffy than she is about herself. 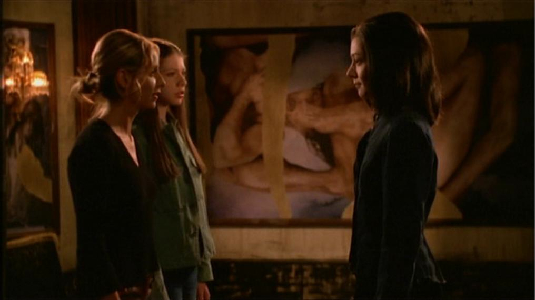 Willow murders Rack (though interestingly what she does to him which kills him doesn’t kill Giles when she does it to him) and nobody cares. Unless I missed the note informing us that Rack isn’t human, she kills a man and nobody cares. 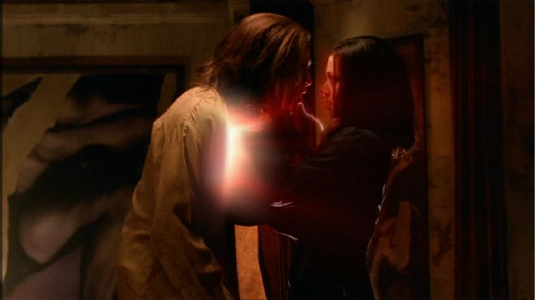 Talking of not caring, I really really don’t care about Spike and his challenges to get - - - a soul - - - and not what Buffy has coming to her. A gigantic yawn of a mislead which kept getting in the way of the main story. 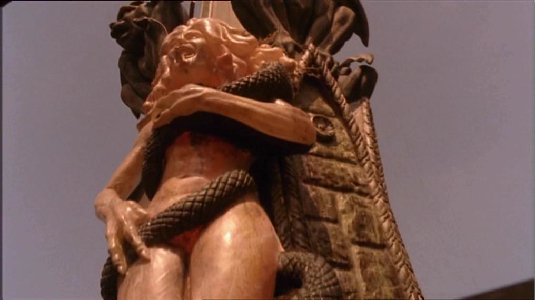 The special effects in Buffy are generally cheesy but that’s no problem for someone raised on Blake’s 7. However, the spire (aka temple) at the random bluff we have never heard of before was tacky and off-putting. Well, not completely off-putting so that the scene between Willow and Xander isn’t beautiful and moving.

It was good of Willow to take time off from ending the misery of all of us to give Buffy something to do in the finale.

One of my other disappointments with Buffy is the complete failure to do something interesting with Dawn. No wonder folk don’t like her when she is written so implausibly and immaturely. The promise we see as she fights the demons alongside Buffy was sadly not capitalised on. 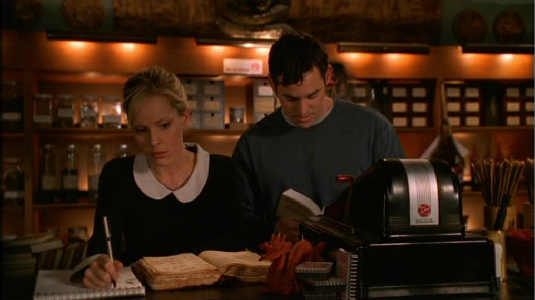 I liked Anya and Xander’s conversation:

I care if you live or die, Xander. I'm just not sure which one I want.

Again with the comfort. Look, we both know things might get ugly at, uh, Wiccapalooza. And if it gets really bad...

The fight between Willow and Buffy was no Faith/Buffy face-off, which was unsatisfactory. 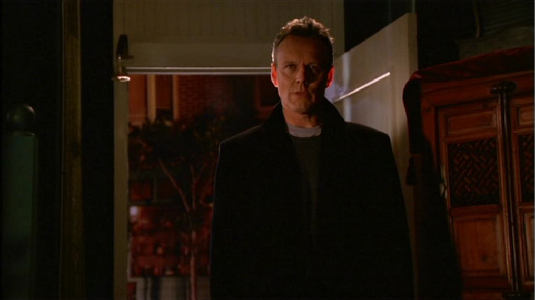 Giles’ appearance at the end of “Two to Go” was the bestest thing eva. However, as Andy put it, the laughter from Giles when he hears the summation of S6 from Buffy is a bit rich because we had to sit through it and it wasn’t actually funny.

Andy reckons S6 isn’t so bad and thinks my sad fannishness (not that he called it that) is the reason why I don’t like it. I’m not so sure that he is right because there is so much fabulous Tara stuff in S6 and I still don’t like it as a whole. I have no desire to watch episodes like “Smashed”, “Wrecked”, “Gone”, “Doublemeat Palace” and “As You Were” ever again and I think that is the worst thing I can say about Buffy.

I’m going to try very hard while watching S7 (alongside Angel S4) to be positive. I will be banning the words “I don’t care” because ultimately this a TV show created by Joss Whedon and, honestly, despite what I also say about Dollhouse, I do care.