Dollhouse - "A Spy in the House of Love" (Andrew Chambliss)

What a great episode. Why were the first five so crap? Or why were episodes 1, 3 and 4 so crap? Even three more mundane episodes to the standard of 2 and 5 might not have made this series so hard to get into. I am glad I persevered but it was a close thing; I was pretty unforgiving at the direness of Dollhouse’s first offerings. I don’t think the excuse of a new team taking time to bed-in is an adequate excuse. Maybe the really bad ones are the equivalent of “Teacher’s Pet” and “I Robot, You Jane”: basically rubbish but redeemed in retrospect by fans scrambling around for funny dialogue and briefly meaningful moments.

I literally spent periods watching this with my mouth open and I said to Andy that I needed an advert break except the way we are watching it means we don’t get any (though I do know Prison Break is back). 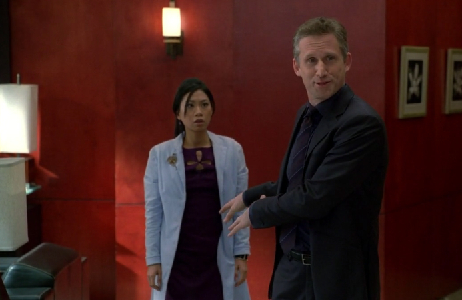 The moral confusion in this show is surely at its height. All the non-dolls are now morally compromised now that Paul has to be immoral if he wants to bring the Dollhouse down.

I was quite surprised to see charts and some string in Paul’s apartment wall because that implies he has found out stuff on his own. 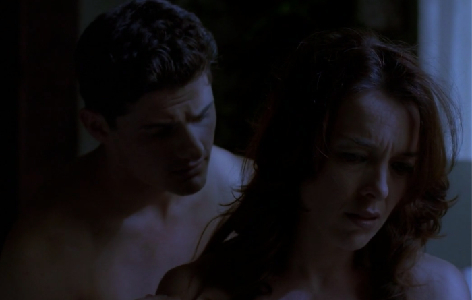 The acting continues to impress me and only Fran Kranz has failed to win me over and I don’t think it is because of Topher’s character.

I liked how this episode was structured. It reminded me of “Out of Gas” and that is a big compliment. I haven’t thought too hard about the various plotlines because I’m sure they don’t all bear up to scrutiny and I’m not in the mood for being mean. Hooray. Like Firefly, to me, this series is less about its “lead” but more about the other individuals in the ensemble. Kudos to Eliza Dushku for not insisting that the show be all about her character(s).

It even managed to ape Alias in perhaps the weakness part of the episode. I would rather see Jennifer Garner running in heels than Dichen Lachman.

Echo’s self awareness took a huge leap forward and if I was feeling as grumpy as before I’d be taking that story development to task for its suddenness and inconsistency. Did last week’s reset have no effect on Echo at all?

To finish, a criticism: I understand that the conversation at the beginning between Echo and Boyd was important because Echo was talking about trust but since I was both fascinated and repelled by her outfit I have no recollection of anything she said. Maybe, in the future, important conversations could be conducted by people wearing cardigans.