You're garbage. And you know it. 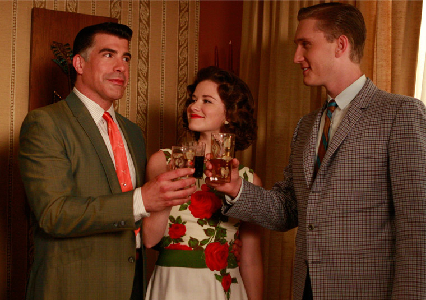 The Don flashback was intriguing and tantalizing.

Has Joan met her match? Jane won that bout but there’ll be sticky times ahead.

Have I mentioned before how much I detest Roger? He is so creepy and always looks as though he is going to make a pass at any woman.

Sal’s behaviour at dinner toward Ken was a little OTT. And would Ken not have missed his lighter quite quickly and guessed where he had left it?

I loved Sal’s wife, Kitty. She was instantly likable in a way that I can’t think that any other character has been (except, maybe, Rachel). I wish Ken behaved as nicely as he did in this and “The Wheel” because generally I find him rather sinister.

God, not more of the Barretts I thought when Jimmy phoned Betty. However, I am willing to put up with more of “you people” if it leads to an awesome Don smackdown. The silence in the car journey home would have been a brilliant way to the end the episode (like "Hush") but Betty vomiting was perfection (and I can’t stand vomiting scenes usually).

Obviously people littered in the sixties but would people like the Drapers be such bad citizens? It seemed a rather clunky way to make a comparison between a lack of concern for their surroundings versus a desire for a pristine car interior.

There quite a lot of Betty hate on the TWoP boards – TWoP is the only place guaranteed to be spoiler free in episode discussions – which I am puzzled about. [I also don’t like the new use of the word “hate” to mean “criticism”.] Some of the criticism centres on Betty’s alleged shallowness that I do appreciate is a valid concern but in general the complaints are about Betty being a bad mother. First, I dispute that she is a “bad” mother. She may not dote on her children but seems attentive and engaged enough, e.g., she doesn’t have to sit down and eat with them. Secondly, why should she dote on her children? Children she had because that was expected of women in her position. A modern Betty, a woman in her late twenties, has the real choice of not having children if she doesn’t want to have them. The criticism is also gendered. She gets called on her parenting while Don gets a pass. She may not have finished her game of chequers with Sally but at least she was playing with her daughter unlike Don. I also see that people can look for reasons to see her as bad mother. When Jimmy phones her, she shoos Sally out of the kitchen and that was seen as bad by a couple of posters. I can’t say that not wanting a potentially noisy child near you when you are on the phone is a symptom of poor parenting!

This is the first episode in a while that has gone me itching to see the next one as soon as possible.