I came to rescue you

I was shocked when Betty's dad grabbed her boob. I think she recovered more quickly than I did.

It's a shame that the actor playing Glen isn't very good. I really didn't believe him when he told Betty that he hated her. Betty has been triggered at last. She needs to take charge and with Don away she really has to step up.

Despite Don's advertising acumen he just cannot work out how to talk to his wife (though I suspect a confession and a heartfelt sorry might work) and he has now run away (he also tried to run away with Rachel).

Joan was unnecessarily mean to Paul even if he is a pompous bore.

When Betty seduced Don on the bedroom floor I was convinced it was a dream just because the episode had been co-written by Marti "Buffy" Noxon.

Pete is such an arse although no matter how crass and appalling he behaves, he always manages to redeem himself in some way. In this it was his touching conversation with Peggy about his father and mother. 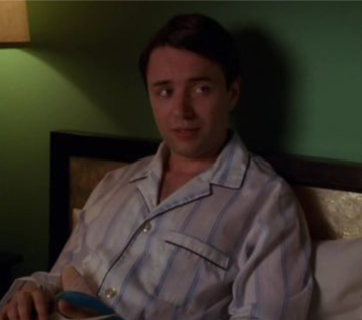