I think I get Matthew Weiner’s intentions for “The Jet Set” but I felt a growing sense of disbelief as the episode progressed. It just didn’t work at all. The bohemians felt so phoney that it took me ages to realise that they weren’t actually con artists or something of that ilk (or maybe they were - sometimes I think I watch through a fog of incomprehension). The actor playing Willy was the least convincing and Joy with Don felt forced and unnatural.

I may be misinterpreting this but I felt they were also trying to present Pete as an awkward and somewhat repellent figure. He may be a bit of an idiot (maybe) but he’s not so instantly dislikeable and certainly has not been depicted in that way before.

All the focus on Don and his failure to connect to people who have cracked glasses poolside meant no Betty time and I did want to see how she was getting on while he was away.

I loved Kurt’s coming out which certainly didn’t seem implausible to me. Not everyone was terrified of upsetting conventions and he is (pointing to Scandinavia maybe) European… I am disappointed his makeover of Peggy didn’t do something with her fringe but everything involving Kurt and Peggy made me laugh. She also wore two lovely outfits: a cream dress with red flowers and a green and black suit. 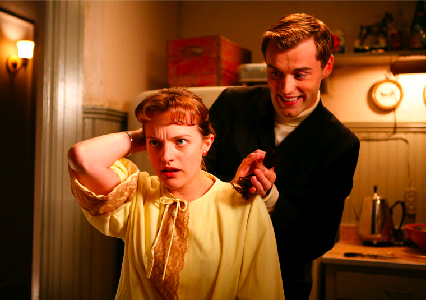