You’re definitely in a strange place. 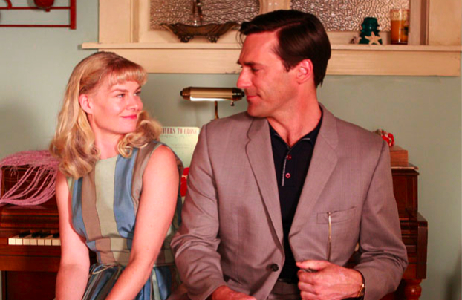 This was an action-packed episode, well, packed. What with Peggy’s new office, Betty berating Sarah Beth, Don and Anna then and now, Joan’s rape, the Popsicle and Clearasil accounts, and Peggy cracking a joke, there was a ton of great stuff to digest.

We were taken once again away from the New York world that we are used to but unlike “The Jet Set” the scenes in San Pedro, CA, totally worked.  Don’s relationship with Anna was fascinating and the actor (Melinda Page Hamilton) was instantly likeable. Dick/Don’s excitement over meeting Elizabeth was a little overplayed by Jon Hamm but the line “I just like the way she laughs, and the way she looks at me” just killed me with its irony.

I was concerned that the child playing the piano was Don’s son which was a complication I wasn’t interested in seeing.

Peggy scoring Freddy’s office just by asking was fabulous and seeing her behind the desk joking with Pete (“How the hell did you swing this?” “I’m sleeping with Don. It’s really working out.”) and drinking whisky was very exciting.

Betty’s changing relationship with her daughter Sally was a pleasure to see though I was 21st century horrified when she put her in the cupboard as a punishment. However, she treated her better later on by giving her riding boots (and hence riding lessons) and telling her the truth about Don was a great leap forward.

Betty’s words during her phone call to Sarah Beth were harsh but I see disappointment in Betty’s reaction. Sarah Beth failed to be faithful despite what she has said to Betty about her marriage and Betty was disappointed.

Joan’s rape by her perfect fiancé was pretty hard to watch. Her face as she looked away into the distance was heartbreaking – Christina Hendricks is amazing and I was sad that she wasn’t Mrs Reynolds at this point because then she could beat the shit out of him. Sadly, in real-life, kick-ass women don’t exist.