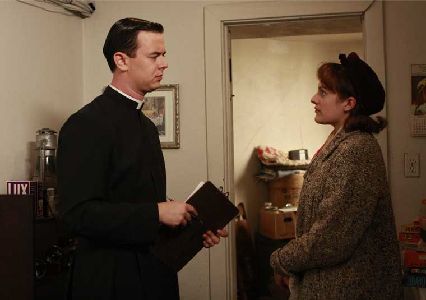 This season ender doesn’t have the power of “The Wheel” but it does have the best scene so far when Pete confesses to Peggy that he loves her and she tells him it’s too late.

It was utterly gripping and it was this scene (following on from her scene with Father Gill) that has convinced me that Elisabeth Moss is playing Peggy very well indeed. Father Gill is doing his job but I was so relieved that Peggy wasn’t falling for his fearmongering despite the imminent apocalypse.

Father Gill: Hell is serious and very real and unless you unburden yourself you cannot know peace.
Peggy: I understand that, Father, but you’re upsetting me right now.
Father Gill: That is your guilt, Peggy. All that God wants is for you to reconcile with him. Don’t, don’t you understand that this could be the end of the world and you could go to Hell?
Peggy: I can’t believe that’s the way God is. Good night, Father.

Betty spends the whole episode telling everyone she doesn’t want the baby to no avail although the much missed Francine has more advice than most. I love Anne Dudek and I think a re-viewing of The Book Group is required. I also love Lois (Crista Flanagan). She is such a sweet character. I do like how actors in these tiny recurring roles sneak up on you in terms of affection. Pete’s secretary Hildy is another favourite of mine (Julie McNiven - "Stand-in/body double for Lindsay Lohan!" - excellent).

I had written a lot of stuff about casual sex but it doesn’t matter. Betty is pregnant, is confused about her marriage, and is drunk. What would I do?

When Don comes to see Betty at the stables I was in two minds about whether I wanted her to say “it’s okay” or to say what she did say. Damn Don’s charisma. Don’s letter was a marvel and the moment when Joan tells Don that Betty wants him to come home made my heart leap.