I want to take your clothes off with my teeth and give you a go-around like you've never had. 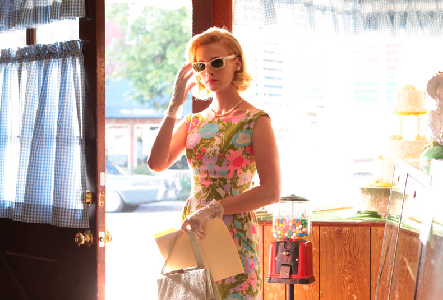 Another excellent episode. I am pleased that this show is picking up mid-season and I am doubly pleased to see some Betty scenes in S3 that I actually enjoyed.

I was oddly elated during her scenes involving Henry Francis. I know what she is doing and if she was married to a faithful husband then I would be mortified but she's married to Don who was at his most hateful throughout this episode.

Betty highlights include being bashful about the effect of her looks (I love Francine: "It's not adorable to pretend like you're not adorable"), her interactions with the children ("freeze!"), trying the drawer in Don's study, the chat with Henry in the cafe, her dismissal of Roger, and her confrontation with Don ("It’s three years, Don! What’s the matter, you don’t know where you’re going to be in three years?" and "You're right. Why would I think that has anything to do with me?").

I have suddenly acknowledged that January Jones sometimes gives weakish performances and I wonder if Betty's iciness is not just her character but JJ's rather frozen acting style.

Peggy makes terrible decisions at times. I'm not at all prepared to guess how her decision to sleep with Duck will pan out but I do hope she doesn't end up working for him.

Peggy is young, she's had a Catholic upbringing, she has no friends, she has nowhere to turn for advice, New Cosmopolitan hasn't been launched yet, no wonder she makes mistakes.

A mistake she shouldn't have made was to go into Don's office after Roger had just left. Boy, was Don hard on her! Not all unjustified but harsh. Elisabeth Moss was awesome here.

Across the usual blogs there were many complains about Peggy being a Norwegian Catholic (as if it was impossible not just improbable) and yet Conrad Hilton was a Catholic Norwegian. I loved Don's response to him when he was critical of his office décor: "Maybe I’m not on time because I was with my family reading the Bible.” Hilton was in Don's chair as were Betty and Cooper.

How much do I enjoy Pete and Peggy together? They bicker beautifully.

Don is quite spectacularly nasty and it was hard to feel sorry for him when he was felled by the male hitch-hiker. I thought those scenes were the weakest part of the episode. Though I thought the grammatical error in the hitch-hikers' note was a delicious touch (I sincerely hope it was deliberate).

Don is not the reason why I watch Mad Men. He's very important but he's not why I watch it with relish.