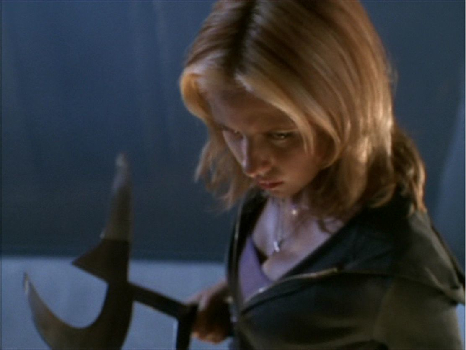 This was quite obviously my final episode review of Buffy the Vampire Slayer. I started this “project” in (no, really?) on 20th April 2006 (when I was 41) and I have thoroughly enjoyed myself along the way. I am greatly chuffed by the number of people who have taken the time to make comments which were without exception more thoughtful and analytical than I ever managed. (I defend myself by pointing out that I never thought I was being smart.)

I would like to thank Joan the English Chick and the other folks who transcribed all the episodes, the folks over at Screencap Paradise whose screencaps saved me a lot of time, and all the bloggers and LiveJournal keepers who have given me so much to think about. I am in awe of their talent and insight.

I have now watched every episode twice and some I have seen many, many times (and there are more that I have seen parts of many, many times). However, if I want to spend another three and a bit years of my life doing another rewatch, I will only watch S1-4 again and selected episodes from 5, 6 and 7.

S5 is where it gets “complicated” and where, too often, it fails to match its ambition and is disappointingly unengaging and unconvincing.

My favourite characters are Willow and Tara and, while I adore S4 Tara and Willow, too often thereafter they are a rather boring couple.

There are undoubtedly great episodes after S4 but overall the seasons are troublesome and I have to put it down to one thing: Spike gets a crush on Buffy. I loved evil Spike and chipped Spike but, after he fell for Buffy, I became irritated as the show focused on Spike and his relationship with Buffy. I am not that interested in any of my heroines' relationships with their significant others. The great thing about Buffy and Angel was that when they did get together it unleashed Angelus which put the kibosh on romance (for the most part).

I think one of the reasons I loved Tara and Willow’s burgeoning relationship was precisely because it was obscured by metaphors. The explicit course of the relationship between Kennedy and Willow was a literal turn-off for me. Even Oz and Willow's relationship was sweet and somewhat naïve which made it endearing (and they became boring too). And, of course, it wasn’t Willow's show and we weren't treated to episode after episode exploring her relationships.

If I had to sum up Buffy the Vampire Slayer in one word, I would call it layered. It is fluffy, profound, funny, heartbreaking, silly, serious, exciting, sad, entertaining, thought-provoking, groundbreaking, and add your own. It also boasted sensational outfits because ultimately that is what mattered*. 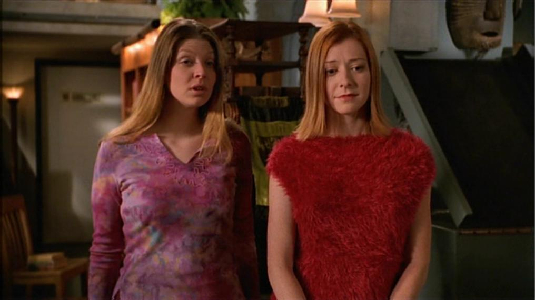 *Or maybe what really mattered was friendship and family because when you lose your friends and family you get S7.