This is a disjointed rant about the episode in which Fred (I mean, Winifred Burkle) became a saint. And another woman died (and RIP Cordelia Chase).

Astonishingly, Angel S5 has not been a patch on S4 (actually not so astonishingly since I like Cordy and Charisma Carpenter and I, sort of, like love Vincent Kartheiser) and now it is actually rehashing storylines from that season.

"A Hole in the World" was manipulative beyond belief. I think my view of the episode is coloured by my continuing dismay with the Whedon theme of getting a couple together, making them really happy for a short time (often a really short time - like an episode) and then making them really unhappy, usually by killing one of them. If Wesley and Fred had been a couple for longer then I might have cared for his grief.

I would complain that Gunn, who was with her for over a year, wasn't at her bedside but, since they had zero chemistry then and subsequently, I had practically forgotten they had ever been a couple until Wesley asked Gunn if he was okay with them going out.

Andy and I were shocked by Wesley shooting a man in the knee. It might have been intended to be funny and I wonder if it was supposed to be that. Maybe it was another thing that I will come on to in a moment but, whatever, I seriously maintain it is one of the most outrageously stupid and offensive things I have seen in the Whedonverse (and that includes Mal kicking a man into a spaceship engine in "The Train Job") and then Lorne hit Eve. Andy said something must be manipulating them and that is, of course, true but not quite in the way he meant.

Lorne hit Eve and why? Because Fred was so fan-bleeding-tastic. So wonderful, that peace-loving Lorne punched Eve because she said the words "why would we even care about her?"

Wesley's behaviour could be viewed as manly behaviour because there were other incidents in the episode that made it feel like a parody of macho attitudes except that it wasn't a parody. The low angle shot of Angel and Spike exiting the office after the line "Come on. Let's save the day" was one incident as was the bonding between Spike and Angel because nothing gets men more riled up and heroic in cliché land than womenfolk getting murdered.

On and on, furthermore, Wesley was saddled with a dreadful lines about loving Fred before he met her. This means he loved an ideal woman not a real woman as Strega and Joanna pointed out over at TWoP.

Have I mentioned the Aliens shoutout (which I suppose Joss is sort of allowed to reference) and the icky snogging at the beginning? And this classic line from Lorne (in a show with the only kind of gods being those with small gs) "If nobody thinks it's too ridiculous, I'm going to pray."

To be generous, I'm not sentimental so a sentimental episode about a woman dying (who I didn't really have any time for except in "The Magic Bullet" when Fred actually did stuff) and the woeful efforts by her boys to try and save her was never really going to get to me. I kept muttering "where's the puppets?" throughout.[caption id="attachment_2569" align="aligncenter" width="533" caption="She looks nice with blue hair."] 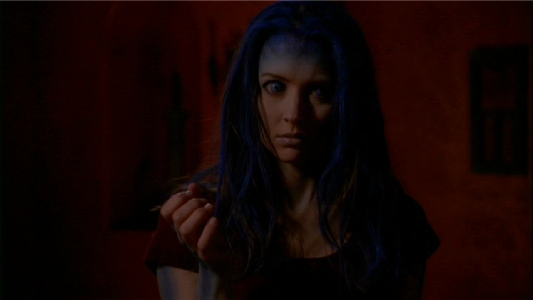 *no, you just can't because your character wasn't going anywhere and the obvious answer wasn't to make your character more interesting and complex (and by complex, I don't mean adding yet another scientific skill to your already impressive list) but was to kill you.