A cracking episode that brings to a head a storyline I really wasn't enjoying. Poor Cordelia (and poor Oz too but it seems less awful for him since I know what happens...), she did give up so much for Xander and it's not as if he is even worth it.

Spike (and James Marsters) are fantastic - his moments with Joyce are a series highlight - but throughout he is funny, scary and not a little perceptive. 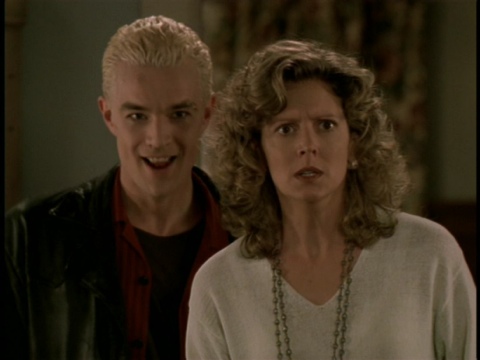 Willow sets a pattern (why, it's a Willow Pattern) - she turns to magic to help herself out of a problem. I love the way she says "there, there" to Spike - it is almost sincere. The episode is full of nice little moments like this: Buffy checking her make up in one of Giles' gadgets; the Mayor musing on mixed metaphors; Spike getting set alight; Cordelia's fake death - no, scratch that one, it's a bit of a cliche...

I have to agree with Cordy, Oz being able to smell Willow is disturbing, though I am surprised it wasn't just fear he could smell.