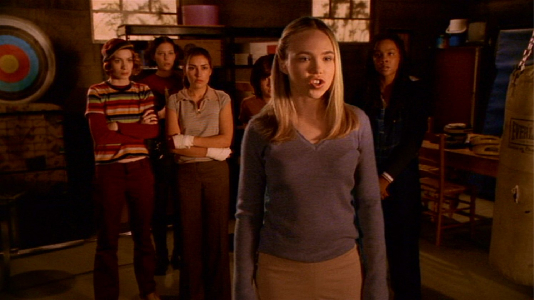 This was pretty dreadful.


Why is Spike still alive? I mean that the writers ought to have found a good reason why the First hasn’t disposed of him rather than relying on the fact that the character is popular.

And, bummer, after I said nice things last time about Kennedy and Andrew, it’s a shame that the latter was so blimming annoying this time with his unfunny interjections. I imagine that the character bible was rewritten to say that Andrew should be "amusingly nerdy" but clearly not all the writers got it right. Kennedy is still a great Potential but I really don’t like her flirting with Willow and, it’s not (just) because she’s not Tara, it’s because it just seems inappropriate and implausible.

Telepathy! We know that Willow has the power but not that Buffy can instigate it. If the Scoobies can communicate in such a cool way then why don’t they do it all the time? Nonsense. 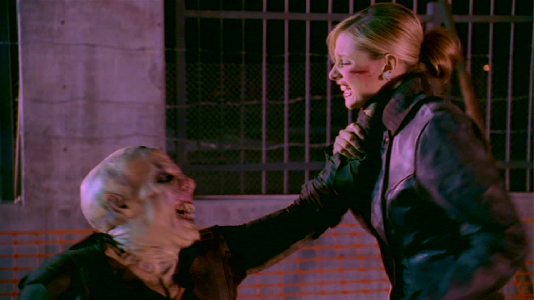 What a lousy plan! Willow could have had a relapse or died or been possessed; Xander came close to being killed and, as for a lesson..., look, there’s THE Slayer getting whipped and the Potentials, who for the most part didn’t even know they were special until sometime between "Bring on the Night" and this, are supposed to be impressed? Some lesson.

Beljoxa’s Eye: all that fuss to get into another dimension (with vortex) including Anya being willing to prostitute herself (which is just plain nasty thing to do to her character (see also “Sleeper’)) and it turns out to be a non-threatening cheap rubber multi-eyed thingy. OK, there were two funny lines delivered impeccably by Emma Caulfield but, oh, what have they done to Anya?